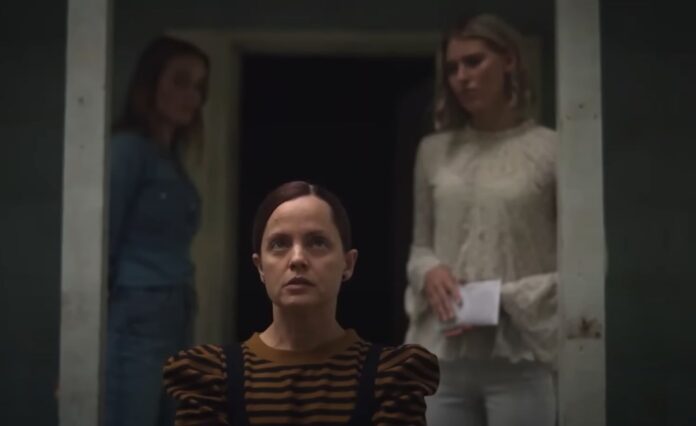 Let’s all agree, once and for all, that we will never go into a creepy cabin in the woods. I don’t care how hot he/she is, how much you “need this job”, or how badly you want to “see if they have a phone because my car broke down”…just don’t. This suggestion is one that really could have been used by the characters in Kevin Lewis’s (Willy’s Wonderland) new film The Accursed.

Elly (Sarah Grey) is in a bad place, after her mother’s devastating suicide she’s pulled back home from her relief work overseas. While going through her mother’s things she gets a phone call from a woman named Alma (Mena Suvari) who tells Elly that she’s been recommended for a nursing job by her late mother. The job’s a cinch, watch over a comatose old lady for the weekend until the hospital comes to pick her up on Monday…easy money. What sweet Alma left out of the job description is that said old lady, Ms. Ambrose, has been cursed by Mary Lynn (Alexis Knapp), a bad ass single mother who was out to stop Ambrose’s wicked ways. Thanks to the curse, Ambrose is now the current Motel 6 for a vicious demon. Elly takes the job, at the behest of her best friend Beth, and heads to…you guessed it, a creepy old cabin in the woods. It’s not long before it becomes apparent that all is not sweet in Candyland.

The baseline plot’s about as generic as they come but as I’ve said time and again, reverting to a formula is not inherently bad as long as you add something to it and make it your own, I think The Accursed manages to do just that. It’s interesting, the movie really is a film that can be seen two different ways by two different people. On my first viewing I saw it for what (I thought) it was, a standard haunted house/demonic possession film and from that viewpoint I wasn’t disappointed. It wasn’t until it was pointed out to me that the story has a lot to say about the relationships between mothers and daughters that I started to look deeper. Maybe because I am neither mother nor daughter, or maybe just because I’m dense, I didn’t pick up on it at first. Re-watching with that in mind I found a movie that delivered on the scares but also delivered some pretty heavy allegory for the tornado of emotions that surround every mother/daughter relationship. Love, hate, envy, expectation, resentment and regret all make appearances but at the end of the day it’s the core tenant that every mother would die for her child that takes center stage.

In terms of cast, the film was great. Sarah Grey, who I first became aware of on Netflix’s cancelled too early series The Order is someone I could look at all day, but there’s a reserved power to her that really shines through. As a side note, one of my favorite things about this movie was that Elly calls the cops when things start getting weird. It doesn’t end up helping her, but I feel like this is an obvious course of action that every horror film tries to get around instead of just facing head on. We would ALL call the cops, why wouldn’t they? Add to that it makes it all the more terrifying when the character DOES call in the calvary and the calvary goes down. Total isolation, no one to call at that point. Kevin Lewis’s direction throughout was on point, the atmosphere he builds turns that small cabin into a one-room shack, closing in on you as you watch. He’s also incredibly adept at framing a shot in a way that makes you feel just a little uneasy, even though you’re not sure why.

If I’m to start throwing stones, I’d only have one target…I wanted more depth. We’re introduced to Ms. Ambrose during the films opening scene. She is a curse maker by trade, which looks alot like a palm reader except she requires blood and when it’s all over someone is usually dead. That’s such an interesting situation, who did she get there? Why did she go evil, or was she always that way? Many things were left vague throughout the film, in some scenarios (like Elly and her Mom’s relationship) it was for the better, but I really needed to know more about Ms. Ambrose. In that same vein you have the astounding Alexis Knapp playing Mary Lynn who lost her husband to a curse and who now, along with her mute daughter, apparently go around hunting witches. She pops in and out but was never really given enough time to build the gravity that character needed.

The Accursed isn’t an incredibly complex film, but it’s got an intriguing story and a very talented cast. Kevin Lewis is sure to have a long line of films ahead of him as director and if you’re looking for a scary movie to spin and get you into that Halloween season feel it’s a perfect option.