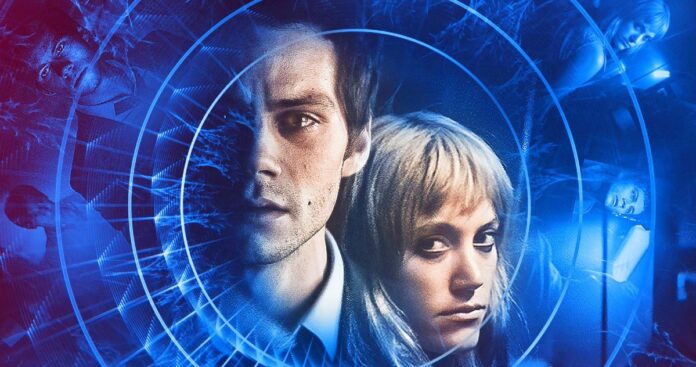 A designer drug has Dylan O’Brien trippin’ balls in Christopher MacBride’s listless psychological thriller Flashback. As much fun as that might seem to invite, its grim and deadly seriousness is only half as frustrating as a story that circles the drain to nowhere. You’ll find little to care about anybody in this film, where they’re going, and even less about where they’ve been.

O’Brien stars as Fred Fitzell, who begins seeing visions of his high school days just as his life is at a crossroads. He lives a nice, comfortable life with his nice, comfortable wife (Hannah Gross), and dull office job that offers a nice, comfortable existence with room for advancement. But Fred’s mother is in the late stages of a terminal illness and suffering from dementia, and that’s something he isn’t willing to confront.

Are these visions a coping mechanism of some kind? Offering Fred an escape from a reality he doesn’t want to face? Is it possibly a psychological disorder passed along the Fitzell family line? Or could it be the after-effects of a hallucinatory drug called Mercury that Fred and his high school pals used to indulge in? An impromptu reunion with old friends (Emory Cohen, Keir Gilchrist) and a seemingly random homeless person dredge up the mystery of Cindy (Maika Monroe), another Mercury user who vanished never to be seen again. As reality and memory blur, Fred seemingly becomes unstuck between his past and his present.

Or something. MacBride introduces a number of options without really moving anything forward, or giving us a reason to want to learn what’s happening. Fred isn’t a particularly interesting character, nor is he especially likable. He’s not a bad guy, but his problems all seem to revolve around his perceptions of women. Cindy is like the most morose Manic Pixie Dreamgirl ever; she exists solely as an idea of Fred’s misspent youth and his desire to relive that time; while his wife demands he act like an adult and be a stable husband.

MacBride does come up with some nifty ways to show Fred’s hazy, fractured mental state. Images from the past bleed into the present and possibly even the future, and with O’Brien playing every version of Fred it adds to the unhinged nature of it. MacBride isn’t untalented as a filmmaker, but perhaps he overthought this story more than was needed. It’s hinted that Mercury could be the connection to a larger, possibly paranormal world out there but it’s never given more than a second thought, one of many ideas introduced that fall flat. O’Brien coasts along without exuding any of the appeal that has attracted him so many fans, while Monroe ends her streak of being the best thing in bad movies. She’s not particularly good in this, either, although she is given so little to do it’s hardly her fault. With all of its trippy games of the mind amounting to nothing, Flashback is one film that you’ll probably want to just forget.

Flashback is available now in select theaters and VOD.