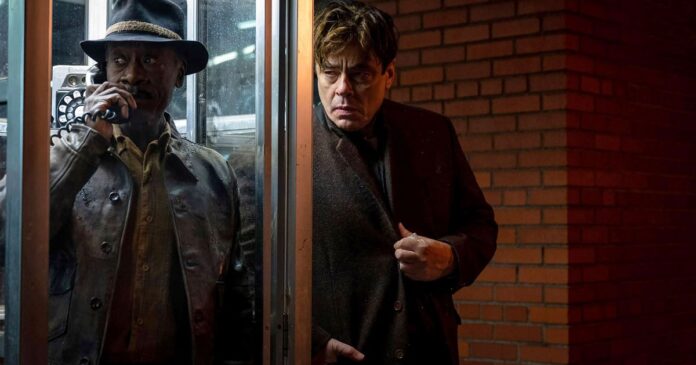 Steven Soderbergh has always been a prolific filmmaker, but he’s been moving at an accelerated clip with five movies over the span of five years, plus HBO’s Mosaic and even the Academy Awards. His latest, No Sudden Move, is a star-studded crime ensemble not unlike his breakout film Out of Sight.

In the trailer for No Sudden Move we see stars Benicio Del Toro and Don Cheadle, both Soderbergh veterans, as part of a group of small-time criminals hired for what should be a simple snatch job, only to have the heist go terribly wrong. Don’t they always?

The film reunites Soderbergh with Mosaic writer Ed Solomon, who is known to most people as one of the guys behind the Bill & Ted franchise.

No Sudden Move hits theaters and HBO Max on July 1st. It’s his second in a three-picture deal, preceded by last year’s Let Them All Talk, which is pretty great.

Set in 1955 in Detroit, No Sudden Move centers on a group of small-time criminals who are hired to steal what they think is a simple document. When their plan goes horribly wrong, their search for who hired them – and for what ultimate purpose – weave them through all echelons of the race-torn, rapidly changing city.