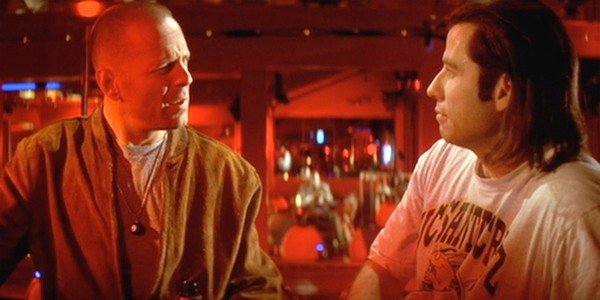 I’m cringing looking at the headline I just wrote, could it really be 27 years since Pulp Fiction? ‘Fraid so kids, but perhaps even more surprising is that Tarantino’s hallmark film was the last time that two titans of Hollywood, John Travolta and Bruce Willis stared in a film together. These guys were two of the biggest action stars of the 90s, how did they never end up on film together again? Pulp Fiction is widely credited for rehabbing Travolta’s career and pushing him back up to A-List status, and while the same isn’t usually said about Willis, if you look close, you’ll see he was saved by the film as well. Hudson Hawk and album called The Return of Bruno and several other bad choices left Willis hanging on to stardom by a thread.

I wish I could say that the two were reuniting for a new Tarantino film, or at least some film with gravitas, but it looks like it’s going to be another one of Willis’s factory made action flicks, something he’s become famous for in recent years. Paradise City is the name of the film and it’s being directed by Chuck Russell who started his career off strong with A Nightmare on Elm Street 3: Dream Warriors and The Mask but then fell off the map with a string of big budget flops. Hey look, I could be way wrong on this and the movie may end up being awesome, I’m just saying…if it walks like a Duck…..

Paradise City will star Willis as renegade bounty hunter (because that’s a thing) Ryan Swan, who embarks on a mission to dismantle the Hawaiian criminal underworld in an effort to take out the crime boss who killed his father, Travolta is set to play the as of yet unnamed crime boss. Not for nothing, but isn’t Willis a little old for this role? I mean, unless Travolta’s character killed Ryan Swan’s dad YEARS ago and he’s just now getting angry about it then I can’t really see it as something you’d call untimely. Anyone playing Willis’s dad would have to be at least 85.

I will say one thing for this film, I have ALWAYS loved John Travolta in the villain role.