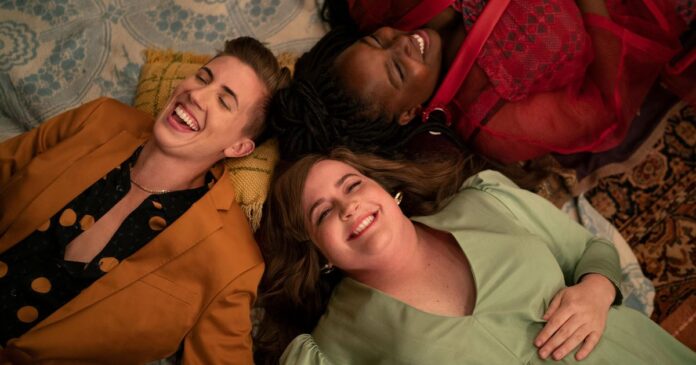 After three short seasons, Hulu’s intersectional body-positive comedy Shrill is coming to an end this Friday. Like past seasons, the show highlights current issues women are facing through the eyes of writer Annie Easton, played by Saturday Night Live’s Aidy Bryant. While it kicks off its third season with a very real issue facing fat people across America, the show then branches out past body-positivity to cover cancel culture, white fragility and privilege, internalized fatphobia, and guilt.  If the first season of Shrill focused on Annie gaining confidence with her fatness and the second season dealt with knowing her worth, the third season is about how messy growth can be.

Last we saw Annie, she was finally finding success and power at her job, gaining popularity and council from one of the female higher-ups in the magazine. She finally dumped her god-awful boyfriend Ryan and her roommate Fran finally found a potential partner in Em. If Shrill ended season 2 in a good place, season 3 is not afraid to get messy. In what might be its most culturally relevant season, Annie is making more mistakes than ever.

While she makes numerous dating mistakes, including accidently texting her blind date that she thought the date was bad, the season’s main arch follows Annie’s attempt to break out past writing about her weight. After spending the day with a republican separatist family with major racist undertones, Annie writes an article that humanizes the cult like group, resulting in her own “cancelation.”

Bryant does an excellent job portraying a character trying her best and fumbling on the execution. Representative of what many white women have been navigating over the last year in regards to checking their privilege, the writers do an excellent job showing the consequences of Annie’s actions in a realistic way. She can’t take her actions back, and though she is sorry and didn’t intend to hurt anyone, it’s not the job of the Black people in her life to educate her or hold her hand through the backlash. While the show has been criticized in the past for sidelining Fran’s character, a black Nigerian lesbian played gracefully by Lolly Adefope, this season gives Fran more agency. “I can’t get you through this,” she tells Annie after her friend apologizes for the umpteenth time for the ignorance of her article.

This season is not all social justice issues. With its signature scorching humor, Shrill’s final eight episodes are genuinely hilarious. With the additions of SNL and Los Espooky’s Julio Torres as Fran’s boss at her salon co-op and and SNL’s Fred Armisen as the co-founder of the magazine where Annie works, absurd little joke nuggets are scattered throughout some of the show’s more intense moments, delivered with comedic accuracy. As always, Jo Firestone and Patti Harrison, who play Annie’s co-workers absolutely steal every scene they are in. Harrison and Firestone are definitely names to watch.

While it does feel like it has more to say, Shrill’s ambiguous ending is reminiscent of British prestige dramadies like Fleabag or I May Destroy You. Is it a shame that one of the most bodily diverse and progressive shows is only ending after three seasons and twenty-two episodes? Absolutely. However, for a show about owning your experiences, ending Annie and Fran’s journey on the writer’s terms seems like a good way to go.

The final season of Shrill can be streamed on Hulu. Watch the season 3 trailer below.