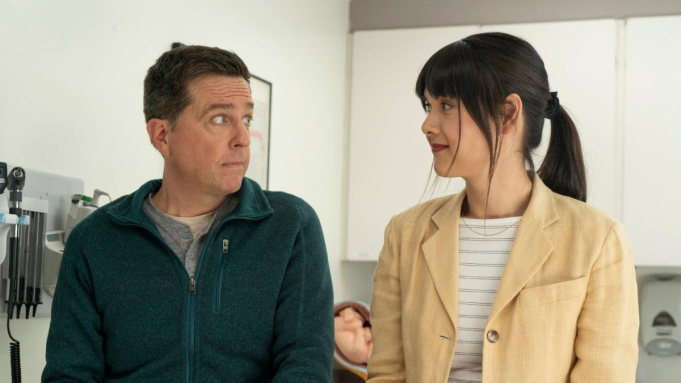 *NOTE: This is a reprint from this year’s virtual Sundance Film Festival.*

The biological clock doesn’t always toll for women, at least not in Nikole Beckwith’s charming, understated Together Together. It’s an interesting idea; most movies cast men of a certain age as resigned to their ways, even dismissive at the idea of parenthood. To see that idea flipped and played for low-key laughs by stars Ed Helms and indie-comedy fave Patti Harrison is definitely a feather in its cap, even if the results are modest at best.

In true Helms fashion, he plays a loveable dorkball in need of something more in his life. The film opens on his middle-aged Matt, having an awkward meeting with Anna (Harrison), a trendy 20-something who is looking for something, too. Desperately wanting a relationship, but finding himself alone, Matt isn’t letting his single status stop the plans he had in mind. Most of all he wants to be a father, and Anna is there interviewing to be his pregnancy surrogate. She’ll use the money, which Matt earned from selling a popular dating app (so current!!!), to get her own life on track. Anna’s past as someone who gave up a child for adoption would seem to complicate matters, but it’s hardly an issue. An odd choice for a movie that stays fairly muted throughout. Her dry sense of humor, on the other hand, proves to be both a gift and a curse for Matt.

Beckwith explores this odd gender dynamic with a decided lack of the usual Sundance quirkiness. She plays it straight-up for the most part, and never angles in for easy laughs. It’s a wise idea; the concept is already unusual enough that to go any further would be forced. However, there’s no real effort to explore why Matt’s decision is so strange. Conversations between them rarely raise above the level of “cute”. Split into three trimesters, we see Anna initially try to keep her relationship with Matt on a professional level. Of course, that isn’t truly possible. He’s always around, nosing around in her life, including her sex life, that he comes across as insufferable. There’s also the way he controls her diet, and keeps tabs on where she’s going.

It’s in the second trimester where Together Together starts to become something more, and we see the bonds form between Matt and Anna over, what else, choosing paint colors for the baby room. His demanding nature doesn’t really tone down, but there’s insecurity and fear behind it, which he begins to open up about. Through Friends binges and therapy sessions, which is where the hilarious Sufe Bradshaw and Tig Notaro spice things up as therapists/referees, they become something more than individuals in a business transaction and something closer to platonic love.

Curious choices are made along the way, however. When Beckwith reaches too hard for laughs, she injects a sexual tension that doesn’t fit with the rest of the film. You could almost miss it if not paying attention, but as Matt gets hurt by Anna’s dismissive response to someone mistaking them for a couple, it adds an ugly wrinkle to the closeness they had already formed by then.  There’s also a weird fascination Beckwith has with Woody Allen movies, as if comparing the age difference between Matt and Anna to the director’s problematic tendencies. But there is no comparison, and a dissection of his films comes across as unnecessary sermonizing.

There’s a wealth of comedic talent here that Beckwith uses in fits and starts. Helms doesn’t get lead roles to himself very often, but when he does it tends to be in films that dial down the goofy sidekick antics. He’s much closer to Cedar Rapids territory here than The Hangover. It’s a well-calibrated performance, one that evolves as the movie goes along. It’s Harrison who is the breakout star here, though, bringing an edginess and depth to Anna as her investment in the pregnancy deepens. Notaro and Bradshaw make the most use of their few minutes on screen, while Rosalind Chao is a welcome presence as Anna’s doctor. While some may find the weird deadpan energy Jose Torres brings as Anna’s coffee shop co-worker, it’s more often he grinds what little momentum the movie has to a halt.

Together Together is an imperfect film that holds its share of rewards as a new kind of love story. There’s also the film’s surprisingly beautiful childbirth scene, featuring a trans actress in a role usually carried by cis women. I don’t know if that’s something I’ve seen before, but it felt like something special was happening there, and it was completely unexpected from such an unassuming film.

Together Together opens on April 23rd and in digital on May 11th. And do check our our interview with stars Ed Helms and Patti Harrison here.