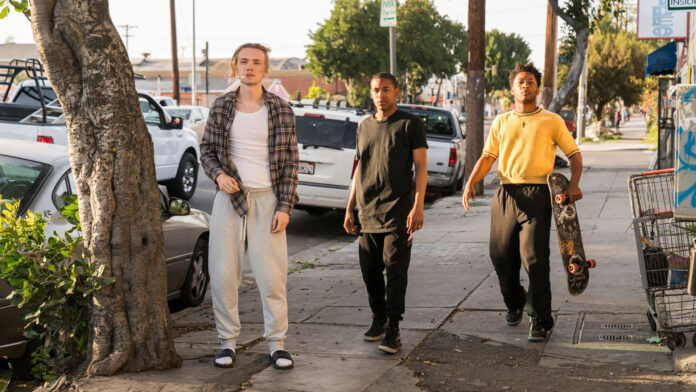 If you know the work of music video director Nabil (he’s done stuff for Kid Cudi, SZA, and others) then you’ve seen that he employs a cinematic style that’s just right for the big screen. We get to see Nabil do just that with his directorial debut, Gully, an L.A. crime drama that boasts some big names sure to attract a lot of attention.

Kelvin Harrison Jr., Charlie Plummer, and Jacob Latimore star in Gully, which initially looks like a Los Angeles-based drama about three kids just trying to make it. But a few minutes into the new trailer, shit gets pretty crazy and hyper-violent, with fire & brimstone sermons and video game graphics.

Gully debuted at Tribeca back in 2019 and the reviews weren’t great, but to me this footage shows a lot of promise. The film opens in theaters on June 4th, followed by DVD on June 8th.

Produced by Romulus Entertainment and directed by Namil Elderkin from a script by Marcus Guillory, GULLY is the explosive and timely story of three boyhood friends—Calvin, Nicky and Jesse—surviving an upbringing in LA’s roughest neighborhoods. Steeped in violence but united by friendship, together they find their escape in one out-of-control night of partying. But when the rampage stops, retribution begins.