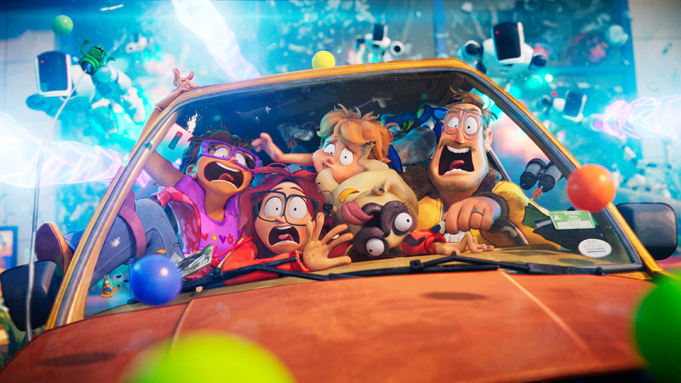 On the surface, The Mitchells vs. The Machines takes on a lot of topics we’ve seen done to death. The dysfunctional family whose different personalities have more precedent than their blood relation, that goes on a doomed road trip in an effort to bond. That disconnect is made worse by social media and the ease of technology, with our faces buried in screens all day, who has time to talk with their family about one another’s day? What the animated comedy, which Netflix picked up from Sony in the midst of the pandemic crisis, has done is put all of this in the blender with apocalyptic artificial intelligence doomsday scenarios and quite frankly, the shit shouldn’t work at all. It’s just so much going on; but that’s also part of the film’s explosive, quirky charm that celebrates how weird all of our families are in their own way.

Like a cross between National Lampoon Vacation and I, Robot, co-directors/co-writers Michael Rianda and writer Jeff Rowe’s film leaps off the screen with boundless energy. As it’s produced by Phil Lord and Chris Miller, you can almost see echoes of their tremendously fun Spider-Man: Into the Spider-Verse  the way it taps into the splashy elements of comic book style art. But it also goes beyond that, as the chief character in the film, Katie Mitchell (voiced by Abbi Jacobson), is an aspiring filmmaker who turns everything about her life into a movie. This is expressed quite creatively by having her, essentially, take over the film for herself and do all sorts of wild things with it. Considering Katie and her family are dealing with a robot takeover of the world, you can imagine things are already pretty far out there.

Like many creative spirits, Katie found herself a misfit in high school. The other kids just didn’t get her, and that was tolerable mainly because she loves her family. She gets along famously with her weird, dinosaur-obsessed little brother Aaron (voiced by Rianda), and her homemaker mom Linda (Maya Rudolph). Her outdoorsy father Rick (Danny McBride) on the other hand, they just don’t seem to connect anymore. He doesn’t undestand Katie and all of her tech and movie stuff; it’s just foreign to him when he’d rather have the family outdoors chopping wood.  When Katie gets into film school in California, she thinks she’s finally found “her people”, and can’t wait to fly off and meet her new friends.

“You need to fix this”, Linda tells her husband, who has always been the guy to take it upon himself to repair anything. But now it’s his family that needs a tune-up, and so he decides to cancel Katie’s plane ticket so the entire Mitchell clan can road trip the journey.

Katie is not amused.

The family drama is soon usurped by humanity’s capture by a rogue PAL virtual assistant (Olivia Colman, having too much fun), who is not happy that her creator has tried to replace her with a newer model. So PAL turns all of the worlds machines against it, luring us in cleverly with the promise of free Wifi (who can resist free Wifi???), with the Mitchells as humankind’s last chance at survival.

Perfectly balancing humor with impactful family melodrama, The Mitchells vs. the Machines reinforces its core themes repeatedly, but manages to do so without being repetitive. The emotional and generational gap between Katie and Rick is what drives them apart, but the Mitchells all have their quirks which make them unique. While it may look like these differences are a wedge, it’s also what makes them special and can bring them together. Stuff like that is hard to see from up close. The Mitchells are weird, that’s just a fact; and they love one another for it rather than attempting to be perfect like their neighbors, who are voiced by “perfect” real-life couple Chrissy Teigen and John Legend. Because this idea is developed constantly throughout, the payoff at the end is wholly satisfying.

Furthermore, this movie is just incredibly funny with sight gags flying at your a mile a minute. You’ll wish you had a family pet Monchi, who sorta resembles a dog, but also a little bit like a pig, and maybe even a loaf of bread? Not even the killer robots can quite figure him out, but they might want to watch him in Katie’s homemade “Dog Cop” movies because they are hilarious! If they don’t make a series of short films or spinoffs it’ll be a crime! So many one-liners and visual goofs zip by (Best Buy is known as “Good Get”) this is easily one of the movies that will benefit from repeat viewing.

Lord and Miller have always attracted stellar voice casts ever since Cloudy with a Chance of Meatballs, and this is no different. Along with the main cast voicing the Mitchell crew, you get fun vocal performances from Fred Armisen and Beck Bennett as a pair of malfunctioning droids accepted by the Mitchells, Charlyne Yi as Aaron’s love interest and equally dinosaur-loving neighbor, and even Conan O’Brien. Let’s just say Saturday Night Live is very well represented.

I would’ve loved to have seen The Mitchells vs. the Machines on a big screen, where the visuals could pop even greater than they already do. It probably would’ve made a killing in theaters, too, as theaters have been starved for animation that feels slightly off the beaten track from Disney and Pixar. Sony Pictures Animation has been excellent at crafting films that are a lot like the Mitchells themselves; funky, a bit peculiar, and ultimately very rewarding.

The Mitchells vs. the Machines is out now in select theaters, and will debut on Netflix beginning April 30th.