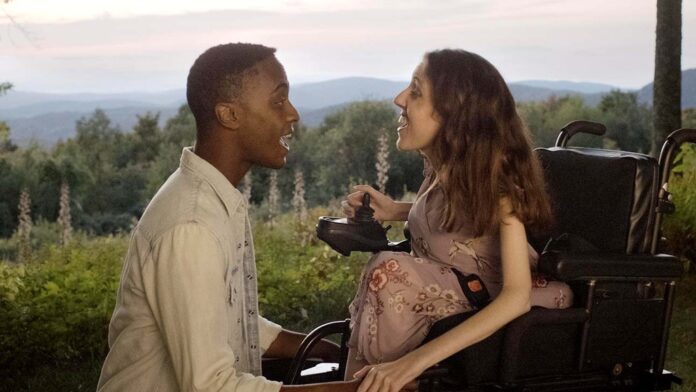 Over the past couple of years, Zeno Mountain Farm has become a hotspot for the film industry. In 2014, the non-profit centered on providing a traditional camp experience for disabled and non-disabled kids and young adults were the subject of the well-received documentary Becoming Bulletproof. It was at their Vermont headquarters that the Peanut Butter Falcon filmmakers first met their star Zack Gottsagen, before making a movie for him. Now the camp has released their first feature on their own with the musical comedy Best Summer Ever, produced by Maggie Gyllenhaal, Peter Sarsgaard, Amy Brenneman, Jamie Lee Curtis, Ted Danson and Mary Steenburgen.

After meeting at a performing arts camp, dancer Tony (Rickey Alexander Wilson) and musician Sage (Shannon DeVido) must go their separate ways to start the school year. Unsure when they will see each other again,  the pair leave camp keeping secrets from each other. Of course through comedic complications, Sage ends up attending Tony’s high school and the two have a rocky reunion. Trying to navigate a relationship outside of camp, with mean cheerleaders and teammates and plenty of parental pressure, proves to be no easy feat for Sage and Tony

Taking center stage is Shannon Devido (Difficult People). Not only can she belt like Patti LuPone, her comic delivery and timing are spot on. Acting as her perfect foil is musician MuMu, who also wrote eight original songs with Peter Halby. Playing the deliciously mean cheerleader Beth, MuMu squeezes every ounce of comedy in every scene she’s in, working best with the uproariously funny Jacob Waltuck, a vengeful football player who is a terrible quarterback.  Peanut Butter Falcon breakout Zack Gottsagen can be spotted as one of Tony’s friends, while producers Maggie Gyllenhaal and Peter Sarsgaard make small but hilarious cameos. Benjamin Bratt and his daughter Sophia also appear.

Directors Michael Parks Randa and Lauren Smitelli, take elements of Grease, Footloose (yes there is an angry dance), and High School Musical and infuse them into a modern self-aware modern musical.  Like all good high school and end-of-summer movies, Best Summer Ever is very campy. Its cheerful earnestness could easily overshadow the entire film if it wasn’t for its comic bite. It knows it’s over the top and silly at times and plays into that. The script leans into its hokiness and, with perfect delivery from actresses Shannon DeVido and MuMu, ends up working really well. It’s no wonder Randa, Smitelli, Will Halby, Andrew Pilkington, and Terra Mackintosh won the “2020 Final Draft Screenwriters Award” at SXSW last year.

At the end of the day, Best Summer Ever is a joy to watch all throughout its breezy eighty-minute runtime. Though slightly unpolished, this film is a testament to what screen representation can do.

Best Summer Ever is available on DVD and on-demand. Watch the trailer below.