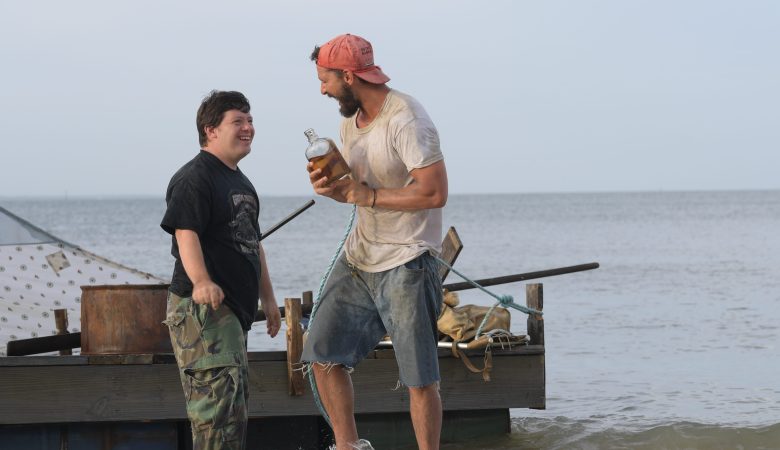 As a wrestling fan it’s been a treat seeing it grow beyond limited cinematic confines set by films such as No Holds Barred and *shudder* Ready to Rumble. Following on the heels of the excellent family drama Fighting With My Family, the sport of pro wrestling now is key to the charming Tom Sawyer-esque adventure, The Peanut Butter Falcon. A low-key human drama with big names including Shia LaBeouf, Dakota Johnson, and Bruce Dern, along with wrestling superstars Jake “The Snake” Roberts and Mick Foley, it’s the film’s charismatic newcomer Zack Gottsagen who emerges as a champion.

Gottsagen is an actor with Down Syndrome who befriended the writer/director duo of Tyler Nilson and Michael Schwartz. Together they came up with a starring vehicle for him that would make the best use of his over-sized charisma. That role is Zak, a young man with Down Syndrome lives in a North Carolina nursing home because there aren’t other facilities designed for people with his specific needs. There, he’s aided by the feisty senior citizens, notably Carl (Dern), in repeatedly escaping the home, much to the chagrin of caretaker Eleanor (Johnson). On this latest occasion, Zak gets away wearing nothing but his underwear, in hopes of finding a wrestling school run by his idol, professional wrestling superstar the Salt Water Redneck (Thomas Haden Church).

Zak is a big enough personality to carry this picturesque cross-bayou journey on his own, but he’s eventually joined by hard-luck fisherman Tyler (LaBeouf), whose guilt over a troubled past has only earned him a lot of enemies. He doesn’t take too kindly to Zak hanging around him, but agrees to help the likable kid out. Meanwhile, violent retribution for Tyler’s past actions follows close behind. As does Eleanor, who will lose her job if she doesn’t get Zak back to the home.

The turns this movie takes are obvious, but I think you come to this kind of film expecting a certain amount of cliché. They exist to be embraced by an audience eager for a wholesome, heart-warming movie with multiple characters we can feel good about rooting on. Those movies are far rarer than they have any business being. So we aren’t at all surprised that Zak and Tyler grow closer during their journey, something akin to brothers. Throughout it all, Zak is treated with equal footing to the other characters. Nilson and Schwartz don’t try to turn him into a joke, nor do they beg for our sympathy. Zak is his own man with a dream that he will not be denied from.

All around the performances are excellent, with Gottsagen truly performing up to the level of his more-experienced co-stars. It’s another strong, unglamorous role for LaBeouf, following a similarly dramatic turn in this year’s Honey Boy, and Johnson makes the most out of her limited time. She and LaBeouf have greater chemistry than I would’ve thought. I also like Thomas Haden Church as Chris aka the Salt Water Redneck, who turns out to be not at all like his wrestling persona. Having met my share of wrestlers, both active and retired, the desire to be in the ring never dies and that’s something Church brings that’s hard for non-wrestlers to capture.

The Peanut Butter Falcon may have a weird title, but what it says about achieving one’s goals is understandable by all. For Zak, it’s to meet his favorite professional wrestler, but the dream could be just about anything else and he’s so unique, bold, and funny that we’d be invested in seeing it come true.