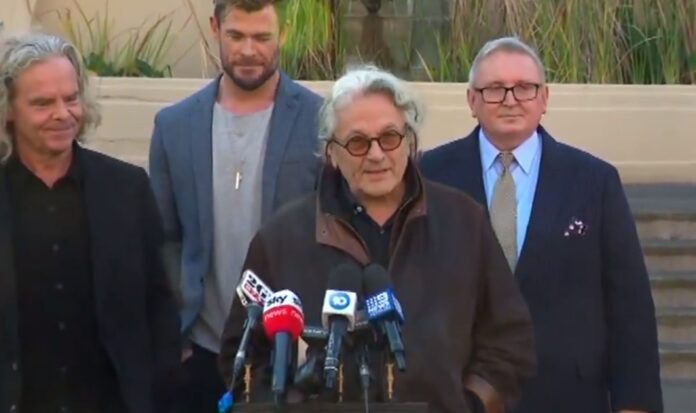 I have to imagine that, if you’re an Australian actor, being cast in a Mad Max film has to be one of the highest honors you can have bestowed on you. Chris “Thor” Hemsworth has officially received that honor, being cast in the upcoming Mad Max spin-off Furiosa, but that golden-haired overachiever didn’t stop there. Nope, he was also on hand to announce that the Australian production will begin next year with legendary Mad Max director, George Miller.

The pair took to the pulpit in a press conference in New South Wales to let the world know that not only would Furiosa begin filming next year, but that it is going to be the largest production Australia has ever hosted. After a year of COVID and the ensuing economic destruction this is a glowing ray of hope for the people of Australia. A standard Hollywood production floods the local economy with revenue, so you can imagine what the biggest production to film in Australia is going to do for the economic outlook of the locals.

So, yeah, that’s awesome, helping out your people! But where’s the juice? What details did we get? Well….none, really. That doesn’t mean this doesn’t elicit excitement. I think it’s safe to say that the entire world was blown away by Mad Max: Fury Road. Miller describes this as something more. While Furiosa will be a prequel to Fury Road, don’t expect a similar story. Word is that while Mad Max: Fury Road was a single story told over a span of hours/days, Furiosa will be more of an epic covering years in the life of it’s title character. They’re already off to a good start, casting Anya Taylor-Joy in the lead role who has absolutely exploded on the Hollywood scene since her initial casting.

Check out the tweet containing the press conference below, and click here for all of our Furiosa coverage!