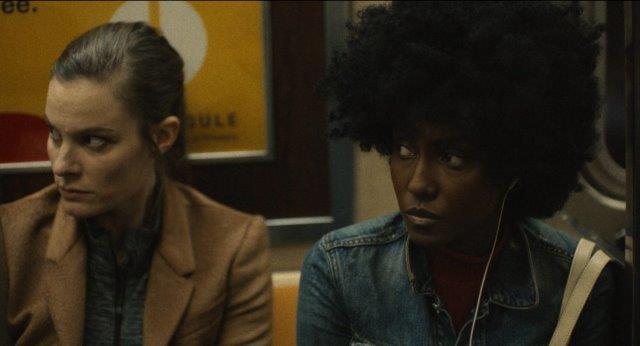 “Eight million stories, out there in the naked. City is a pity, half of y’all won’t make it” -Jay Z: ‘Empire State of Mind.’

Whenever we ride the subway/metro, we go out into the world with complete strangers. Most of the time, we have our headphones on or are face-deep in our phones, completely ignoring those we share our rides through the city with. As a result, we really don’t get to see our fellow humans. We don’t know their stories. We don’t know what’s making them happy, sad, or what makes them tick. Even in public, we are isolated. However, filmmaker David Gutnik’s directorial debut Materna allows the viewer to observe the lives of four different women (along the lines of race, class, and religion) as they all ride the subway together during an ill-fated day.

The big driver of Materna is when Paul (Sturgill Simpson) is constantly harassing women on the train, who are trying their best to ignore him (by either keeping their headphones on or move their seats away from him), and fed up with the rejection, he pulls a weapon out on the women on the train. While we never get to see the potential shooting/stabbing (as he pulls out a gun and a knife), the camera then focuses on four different women who are a part of the action. We get to see what’s been going on in their lives, and what led them to take the subway on this ill-fated day.

The first woman we meet via flashback is Jean (Kate Lyn Sheil). She seems to have some money (based on the view from her apartment), and she’s working on some mysterious virtual reality project as a consultant. At first, it seems as though she’s beta testing some sexual VR program as she’s erotically moaning as she’s testing it out. However, she’s extremely isolated and only speaks with her mother, who constantly is telling her to go out and meet people as well as the fact that she needs to freeze her eggs as she’s getting older. However, she starts to experience pain while testing the CR software, and we realize that she’s pregnant, which is a big deal and scary at the same time, given that she’s on the subway facing a deranged shooter.

The second woman in Materns is Mona (Jade Eshete), who is a struggling actress whose show has been recently been canceled. She’s now trying to figure out the next stage of her life and career. However, she’s also trying to work through some deep-seated issues. Her mother has become a Jehovah’s Witness preacher, and is not very approving of Mona’s career as an actress. She won’t even watch Mona’s show because it conflicts with her religious beliefs. Their only real communication is via text messaging, which of course isn’t healthy. Prior to her joining the others on the train, she works through her family trauma with her mentor Wanda (Cassandra Freeman), which proves to be therapeutic (and exceptionally well-acted).

The third woman whose story we get to learn is Ruth (Lindsay Burdge), a conservative Jewish woman, who is harboring some deep-seated issues with many liberal talking points, especially with her liberal filmmaker brother Gabe (Rory Culkin), who’s making a documentary on police violence. Pretty much just imagine a dramatic representation of every political family Thanksgiving argument that has happened since Trump took office. Everything’s an argument: from Black Lives Matter to the “culture wars.” While the story of Ruth in Materna proves to be a little over the top and a little too “preachy,” the performances are what hold it together very well.

The final (and probably best) story in Materna centers on Perizad (Assol Abdullina). Perizad’s story even when Paul pulls out his gun on the subway, she doesn’t react. She simply turns up her music and closes her eyes. That right off the top, lets you know she’s been through something that even a potential mass shooting isn’t going to phase her. As we see her flashback, we learn that her father in Kyrgyzstan has passed away. She then has to come on home for his funeral. Her story deals with loss, regret, and family issues as the truth of her father’s demise come forward. This story is possibly the best due to the subject matter and the outstanding performances by Abdullina as well as Zhamilya Sydykbaeva and Jamal Seidakmatova as her mother and grandmother.

As Materna concludes, we all come back to the fateful encounter with Paul on the train, now that we know everyone’s story. What’s fascinating and frustrating at the same time is that we truly never really get to see the conclusion of the attack. It shows instead that Materna is more about the four women and their individual lives, than the event that they all share together. While some of the stories aren’t as impactful as others, the performances by the lead actresses are all top-notch and absolutely deliver.

Materna is currently available in New York and Los Angeles and is available on VOD.