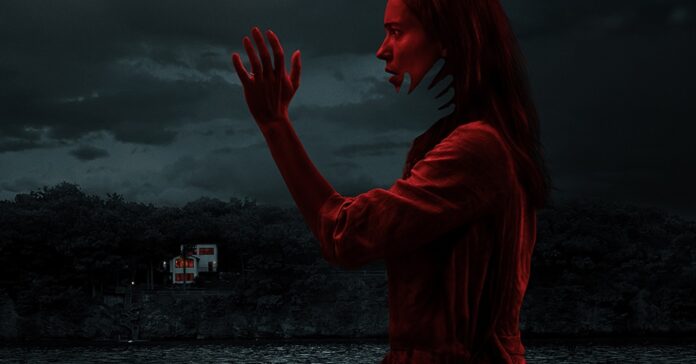 Excuse me for thinking The Night House had already been released, but I remember it from the 2020 Sundance Film Festival where it received some pretty good buzz. Led by Rebecca Hall (in this week’s Godzilla vs. Kong) and directed by David Bruckner (The Ritual), horror film has been on ice ever since but now Searchlight Pictures is ready to release it this summer, where it can creep out genre fans who haven’t had a good theatrical scare in ages.

As the title suggests, an ominous lakeside home is the setting for The Night House, with Hall as a woman who experiences disturbing visions as she uncovers secrets left behind by her dead husband. The cast includes Stacy Martin (Nymphomaniac), Sarah Goldberg (The Report), Vondie Curtis Hall (Die Hard 2), and Evan Jonigkeit (Together Together).

I don’t normally comment on the effectiveness of trailers, but I wish they had sold Hall’s performance a bit more, as that was the main thing people were talking about in Park City.

The Night House opens July 16th which is when I’ll finally catch up with it.

Reeling from the unexpected death of her husband, Beth (Rebecca Hall) is left alone in the lakeside home he built for her. She tries as best she can to keep it together – but then nightmares come. Disturbing visions of a presence in the house calling to her, beckoning her with a ghostly allure. Against the advice of her friends, she begins digging into her husband’s belongings, yearning for answers. What she finds are secrets both strange and disturbing – a mystery she’s determined to unravel. THE NIGHT HOUSE stars Rebecca Hall (HOLMES & WATSON, CHRISTINE), Sarah Goldberg (Barry, Elementary), Vondie Curtis Hall (DIE HARD 2, EVE’S BAYOU), Evan Jonigkeit (Togetherish, Sweetbitter), and Stacy Martin (VOX LUX, NYMPHOMANIAC).