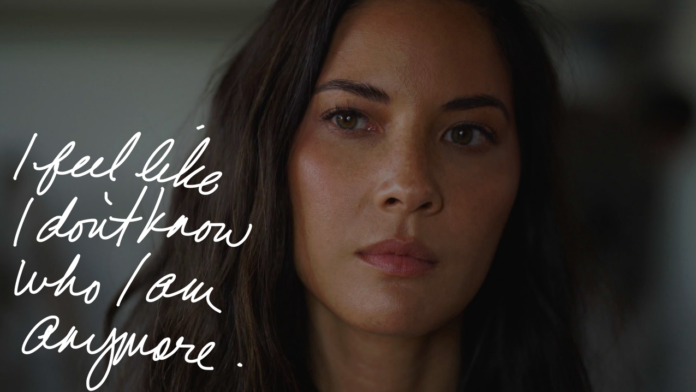 Everybody has one, although we don’t always listen to it. It’s the voice in your head; your mom may have called it the angel on your shoulder. Sometimes that angel is really a devil, corrupting your instincts, your intuition, and even the thoughts you have about your own self-worth. In actress-turned-director Justine Bateman’s film Violet, that voice sounds an awful lot like Justin Theroux, and he’s tearing poor Olivia Munn apart from the inside as she tries to make it in the most judgemental place in the world: Hollywood.

Violet is a fascinating mess, one with valuable insights on mental health, female objectification, sexism, and more. Munn, who has dealt with more than her share of these issues quite publicly, is the perfect choice to play the title character. Violet is a 32-year-old head of production at a major movie studio in Hollywood, the kind of job that one might think affords a certain level of self-confidence. But Violet is completely the opposite. At every turn she doubts herself, devalues her own opinion, and gives in to those who don’t deserve it. She lets her subordinates walk all over her at work. She ignores the obvious romantic feelings she has towards her filmmaker friend Red (Luke Bracey) in favor of a smug Universal Studios exec (Peter Jacobsen) who doesn’t give a shit about her.

So why does she do this? The Committee. That’s the name she gives to the voice in her head that tells her to defy her every whim, and to never be open with anybody. To always keep her armor up, or worse, to drive them away altogether as she does an ex (Simon Quarterman) who has approached her in good faith. Bateman scrawls Violet’s thoughts across the screen in big, bold unmissable cursive. It’s a distraction, and too often an obtrusion into genuinely affecting scenes that need to stand on their own. Worse, this movie literally defines itself by telling you all of the things it could be showing you. Munn is more than capable of pulling off the conflicts within Violet, and pulls off one of her finest performances despite having all of the emotions she needs to portray spelled out for the audience. Bateman, who not only makes her directorial debut but wrote the Violet script, has a good idea that might have been better served with a more experienced hand behind the camera, one that trusts its audience a bit more.