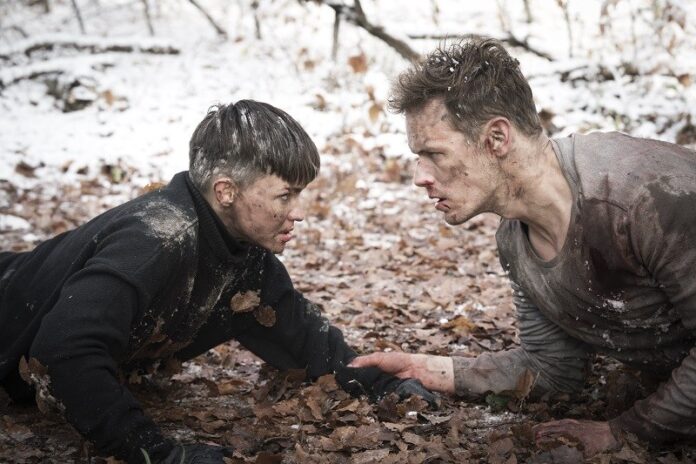 Chances are if you’re checking out SAS: Red Notice it’s for the promise of a showdown between Outlander heartthrob (and maybe the future Wolverine? Or future 007?) Sam Heughan and former Batwoman Ruby Rose. Well, this is one film that knows what its viewers are eager for, as the Under Siege-esque thriller delivers on the anticipated battle while also drawing some interesting parallels between their characters.

Those eager to see what Heughan could do as James Bond will want to peep his performance as the cool, collected Tom Buckingham, a special forces agent in the British SAS. He’s tasked with bringing down the Black Swans, a mercenary group led by the Lewis family; William (Tom Wilkinson), lunkhead son Oliver (Owain Yeoman) and favored daughter Grace (Rose). A Red Notice has been issued by Interpol following the Swans’ indiscriminate slaughter of an entire village was caught on tape and made public.

There’s more to it than that, however, and the Swans have legit beef to strike back at the British government who have been more than willing to use their lethal services. Grace and her squad take hostage the passengers on an underground train to Paris, one that happens to carry Tom and the woman he loves, pacifist doctor Sophie (Hannah John-Kamen of Ant-Man 2), who he hopes to propose to in the City of Lights.

Coincidence? Who cares? It puts Heughan and Rose in frequent orbit to one another as Tom fights off the Black Swans’ soldiers in hopes of saving as many people as possible. Grace, true to the terrorist leader playbook, has demanded a ransom and admissions of guilt from the British government, otherwise, the passengers will meet a grisly fate.

While the direction by Magnus Martens is standard for this sort of action film, it’s the script adapted from ex-SAS officer-turned-author Andy McNab’s book that is surprisingly character-driven. Exploring the relative psychopathy of killers like Tom and Grace, it theorizes that there are good psychopaths who use their coldness to fight for the right causes, while the flipside operate within a system that values, even rewards, cruelty. McNab, a diagnosed functioning psychopath himself, has clearly given the issue some thought, making for some interesting dialogue between the two rivals.

Having never seen an episode of Outlander, I can’t speak to Heughan on that show, however I do know after SAS: Red Notice that he’s a capable action star. I’d say he even fits into a similar space as Daniel Craig, someone who can be both smooth and a physical force of nature. He pairs up perfectly with Rose, who carries with her a dangerous edge that makes her fascinating to watch in roles like this. The surprisingly starry cast also includes Oscar-winner Wilkinson in a disappointingly small role, as well as Andy Serkis and The Umbrella Academy‘s Tom Hopper, the latter looking jacked as Tom’s best friend and fellow agent who is harboring secrets of his own.

The exploration of Tom as a psychopath works as a mirror to his enemy, but it makes the love story he shares with Sophie a bit muddled. While it’s good that Sophie is written as a strong enough character to fight against being a damsel-in-distress, much of the love story centers around her grappling with Tom as a hardened killer. The seeming purpose to get her brain wrapped around being okay with this, even though it flies in the face of chosen profession to save people, not kill them. Her evolution is the one aspect of the film that feels forced, like the writer had an endpoint in mind for her then wrote a story to try and justify it.

Without giving away the final showdown between Tom and Grace, SAS: Red Notice gives fans of the two leads the bloody, savage fight they were hoping for. It’s a film that will largely be remembered for that, as well as its look at personality disorder that the action genre rarely touches on.