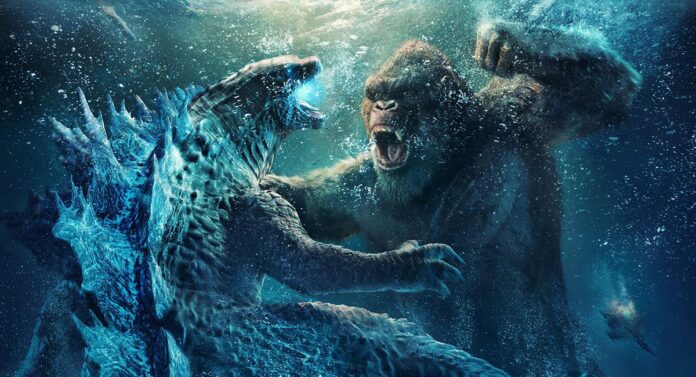 Godzilla vs. Kong. It promises an epic showdown of two cinematic kaiju titans. We’ve seen them battle before, in 1962’s King Kong vs. Godzilla. But this one comes with added anticipation, not only because we know this is going to be an insane VFX spectacle, but also because we’ve been so starved for blockbuster movies that demand to be seen in the biggest format possible. We’re talking two of the biggest and most enduring screen monsters in history, how can you not want to see them in the most epic way?

Godzilla vs. Kong delivers in that the clash of these two behemoths looks absolutely f***ing fantastic. Like the rest of Legendary’s MonsterVerse, the action is simply breath-taking and they know how to make this battle truly feel larger-than-life. Will you give two craps about the puny humans scrambling around this fight? Of course not. With the exception of 2017’s Kong: Skull Island, which was actually helped by the humans’ interactions with the legendary ape, the franchise has struggled to find anything remotely interesting for the people to do. They don’t fare well here, either, and the film is far better when it stays from Kong’s perspective. He is the hero here. Godzilla, after a fashion, comes across as the villain, while the humans are NPCs who just sorta get in the way.

The film is basically like a comic book crossover come to life, and those fans will recognize the dynamic right away. The two heroes will always fight over some ridiculous misunderstanding before a true nemesis emerges that demands them to teamup. Godzilla vs. Kong essentially finds the mighty ape, who has been imprisoned by the good-ish people of Monarch, including Dr. Ilene Andrews (Rebecca Hall) and her young charge Jia (Kaylee Hottle), a speech-impaired orphan from Skull Island who has formed an emotional bond with Kong, similar to the one between Madison Russell (Millie Bobby Brown) and Godzilla.

When Godzilla emerges from the depths to attack an Apex facility seemingly unprovoked, it’s Madison who believes there must be a valid reason. So she teams up with a conspiracy theorist (Brian Tyree Henry) and her best friend (Julian Dennison) to find out the truth about Apex and its power-hungry CEO (Demian Bichir). That truth involves a lot of highly-trained actors babbling a bunch of expository nonsense but it basically boils down to “world domination”. It’s better when they show us the hard sci-fi aspects rather than talk to us about them. When the Monarch trio, which includes Alexander Skarsgard as traumatized geologist Dr. Nathan Lind, blast off into a place called “Hollowed Earth”, it recalls Journey to the Center of the Earth, Fantastic Voyage, and the warp travel of Star Wars. When director Adam Wingard finds the right balance between the fun, campy B movies of yesteryear with modern big-budget world-building.

It’s been interesting to watch this MonsterVerse grow under the guidance of indie filmmakers making their first jump into effects-heavy studio spectacles. Preceded by Gareth Evans, Jordan Vogt-Roberts, and Michael Dougherty, Wingard shows a firm grasp on this universe by presenting it as the blood-pumping entertainment fans are clamoring for. Not to say he doesn’t care about the scenes that don’t include the titular monsters, but I got the distinct impression he was eager to get back to Godzilla’s atomic flame singeing the hair of Kong’s mighty paws. There are a number of shots that will leave your jaw on the floor, like Kong swinging a mynock-esque creature like a baseball bat, then drinking from its skull like a king from his goblet. Sure, some of it is pretty silly, too (ancient titan weapons are a thing), but honestly, when you’ve got Junkie XL’s blazing score behind it you’ll be too pumped up to care. Wingard deserves credit for making the action scenes crisp and easy-to-follow with so much devastation filling the screen, and it’s especially impressive in the final battle which gets even busier.

Godzilla vs. Kong is everything it was advertised to be. It’s a mega-monster battle royale on steroids and worthy of being seen at an IMAX near you. Most of its shortcomings are exactly what you expected going in, and while they’re tough to sit through the wait for more kaiju smashing action is worth it.