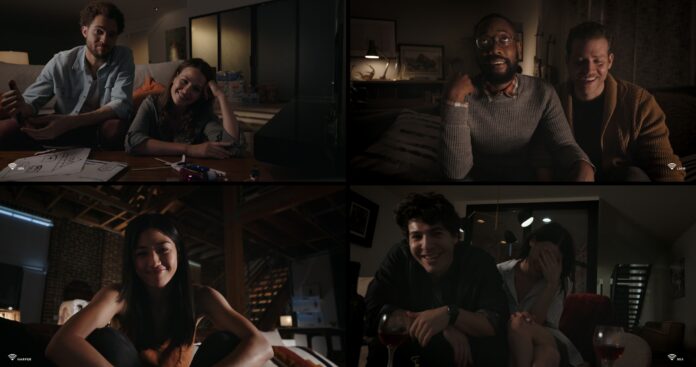 Up next in the line of movies trying to capitalize on the pandemic is Safer At Home. This ‘thriller’ takes place in 2022, two years after the pandemic. There is now a third strain of the coronavirus which is far more contagious and deadly. This has led to tens of millions of American lives lost. To try and combat the spread of the virus, the government has enacted strict regulations and curfews. If you’re caught outside without credentials post curfew, you get arrested and thrown in a detention center. So pretty much…stay inside and quarantine. Try and keep things interesting – maybe host zoom birthday parties with good friends and see where the night takes you. Exactly like the zoom birthday party that Evan (Dan J. Johnson) and Jen (Jocelyn Hudon) put together for Evan’s birthday. 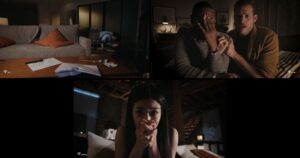 Evan and Jen get the whole gang together. Harper (Alisa Allapach), the only single member of the group who is in Austin. Ben (Adwin Brown) and Liam (Daniel Robaire) a couple from New York. Finally, Evan’s best friend Oliver (Michael Kupisk) and his newest girlfriend Mia (Emma Lahana) who are also in LA. Much of the crew has known each other since high school and had been planning a Vegas trip for Evan’s birthday. That trip has obviously been pushed to the backburner, so Oliver figured why not bring Vegas to them? He has shipped everyone some Vegas party supplies, including some ecstasy. After a brief deliberation, the entire group joins in on the fun. Everyone reacts to the drug differently, but tensions begin to rise at Evan and Jen’s house. Toss in an accident, nosey neighbor, police being called – and all of a sudden Evan is on the run. 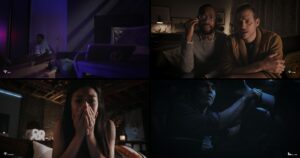 Safer At Home is a mess. The premise has been done before, an entire movie based on video calls, and more successfully at that. Safer At Home tries to add in the premise of the pandemic forcing the main characters to be in the situation they find themselves in. This takes away from the story instead of adding to it. It very well may backfire with viewers, leaving a bad taste in their mouths. Yes, it is incredibly topical, and a lot of the discussions the friends have are incredibly relatable. However, many viewers look for films to escape reality. Safer At Home is a constant reminder of the social distancing and quarantining we all have been going through. Having watched the trailer both before and after seeing the film, I feel duped. The trailer is more entertaining than the film itself and paints a misleading picture. 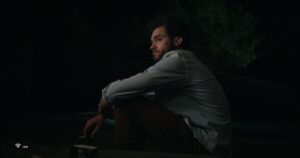 The main saving grace is that the actors in the film do a decent job navigating an absurd script. This is especially apparent in the beginning scenes before shit hits the fan. When they are all interacting and poking fun at each other, it seems natural and believable. Once the craziness starts, everyone begins making head scratching decisions and suggestions. Writer/director Will Wernick and writer Lia Bozonelis’s script really goes off the rails as the film progresses. Most of the actions taken and dialogue seemed so alien and out there. People typically don’t act or speak in the same manner as the characters, which completely removes one from the film. Wernick does have some interesting touches with some camera shots and editing techniques. While they weren’t nearly enough to save Safer At Home, I did appreciate them. Go ahead and pass on this one, you’re not missing much.

COVID Made Them Do It. “The Conjuring 3…” Has Officially Moved To June 2021