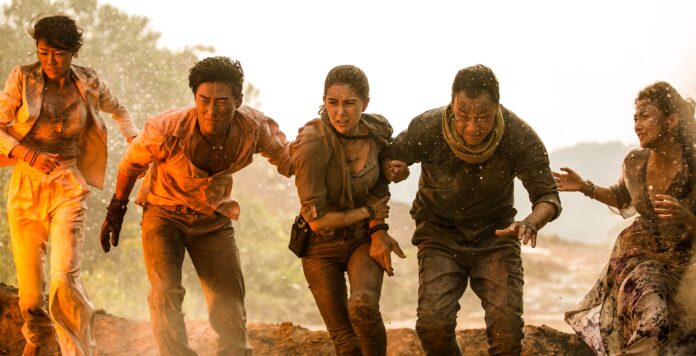 Tianhuo Island is as deadly as it is gorgeous. Unfortunately, a group of unsuspecting tourists and some suspecting scientists find this out the hard way in Skyfire. Tianhuo is part of the ‘Ring of Fire’ – the Pacific Rim volcanic belt. Wentao Li (Xueqi Wang) knows the dangers of Tianhuo better than everyone having experienced a volcanic eruption firsthand. This same volcanic eruption claimed the life of his wife. Luckily his daughter Meng (Bee Rogers) and himself made it off of Tianhuo before any more damage was done. Wentao has sworn to never return to Tianhuo, but life often manages to throw a wrench into plans.

Twenty years later Meng (Hannah Quinlivan) has returned to Tianhuo to carry out her mother’s legacy. Jack Harris (Jason Isaacs) has the bright idea to build a resort/theme park on Tianhuo. He is catering to the extreme tourism crowd and will be shuttling people into the heart of the volcano. He has hired a team of Volcanologists to study the volcano and provide any useful information (which he chooses to ignore anyways). Meng has invented a system called Zhuque to give in-depth readings of the volcano and predict volcanic activities. Meng hopes to use Zhuque to save lives – problem is it kind of works, but not really. Wentao races to Tianhuo to try and save his daughter from the same fate as her mother. 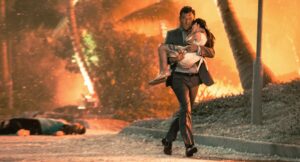 Skyfire is a straight up action-adventure disaster flick. There is not much character development or plot – other than ‘a volcano is erupting and let’s get away from it.’ The film is almost entirely mindless and is chock-full of absurd moments. It seems like Director Simon West and writers Wei Bu and Sidney King decided to completely suspend reality and logic. Any ridiculous thing you can imagine a vehicle or person being able to do, is most likely in Skyfire. At times the absurdity reached levels where it wasn’t clear if West and company were poking fun at themselves, but I don’t believe they were. 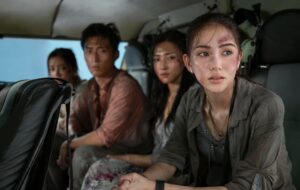 Luckily for Meng, Wentao looks at a picture of the volcano from hundreds of miles away and predicts an eruption. He does this while her fancy new volcano activity detection system on the actual island misses it. Once this happens, it was pretty clear that Skyfire was going to be a long, absurd, ride. West doesn’t waste any time – Skyfire may set the record for fastest natural disaster to occur on film. Granted the speed of Tianhuo’s eruption is a vital plot point, but as soon as the actual film begins – it’s all system’s go.

West tries to mix things up with some artsy underwater shots and slow motion being randomly inserted. Most of these instances either fall flat, or just seem grossly out of place. Visuals are typically one of the highlights of natural disaster films and arguably one of their most important aspects. The graphics in Skyfire may not be top notch, but they are certainly passable. The biggest issues are the script and death-defying sequences, not the way Skyfire looks. Skyfire is the first Chinese “Hollywood-level” blockbuster in the action-adventure realm. West uses an expanded budget wisely, trying to make Skyfire as visually appealing as possible. All-in-all Skyfire isn’t terrible. It’s a middle of the road action-adventure. If you want to embrace the absurd and turn your brain off, there are far worse options out there. If you are looking for a mindless and forgettable popcorn flick, Skyfire will suffice.