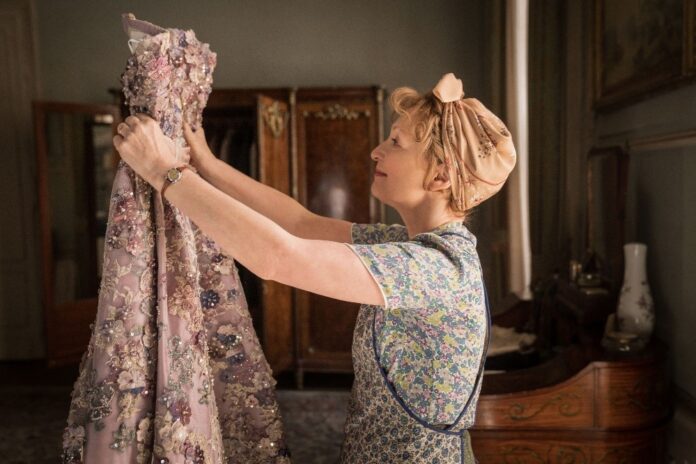 When watching a film like Mrs. Harris Goes To Paris, one would expect a level of luxury and absurdity fit for a fairy tale. Taking place in France’s brightest city and following a London cleaner and widow as she finally puts herself first, the film is the ‘50s jewel tone vintage dream you think it would be. But, amidst Dior dresses and British mannerisms said by the impeccable Leslie Manville, the film touts a modern message of self-care and the fine line between being kind and getting taken advantage of.

The third film adaptation of Paul Gallico’s novel Mrs. ‘Arris Goes to Paris starts out very similar to the others. A series of financial wins and losses puts the idea of owning a Christian Dior gown into Ada Harris’ mind. Manville plays Ada Harris as a kind yet down on herself war widow, who only finds out her husband died a decade before 40 minutes into the film. After a lifetime of serving other people with the help of her friends (Ellen Thomas and Jason Isaacs), she decides to head off to Paris to purchase a $500 dress from fashion house Christian Dior, after seeing another from the designer in a client’s closet.

Like a screwball comedy, a series of unfortunate events cause her to stay in Paris longer than she would like for fittings. Her kind nature wins the favor of the store financial officer (Lucas Bravo) and the head model (Alba Baptista). Disgusted by Mrs. Harris’ unrefined nature and working-class background, Dior’s woman in charge Madame Colbert (Isabelle Huppert) stands in her way of owning a Dior design.

Lesley Manville doesn’t go over the top in the titular role, instead letting humble enthusiasm shine through every scene. Director Anthony Fabian gives us a fairly standard directorial style for a British period film, except when in the house of Dior’s cutting room. When showing off the designs and how the garments are made, Fabian utilizes fades and crosscuts to fulfill the fantasy Mrs. Harris dreamed of. It’s an inspired choice that appears just when the story is starting to drag.

When the focus is off of Mrs. Harris and instead on the various Parisians she meets, the pacing is slowed and uneven. Jason Isaacs plays against type here as a working man with a heart of gold and he is a delight. There is not enough of him nor Ellen Thomas (playing Mrs. Harris’ best friend) to go around.

Overall, Mrs. Harris Goes to Paris is a sugary film with substance. While not all the elements work perfectly together, it’s overall a well-constructed film ready for the runway.