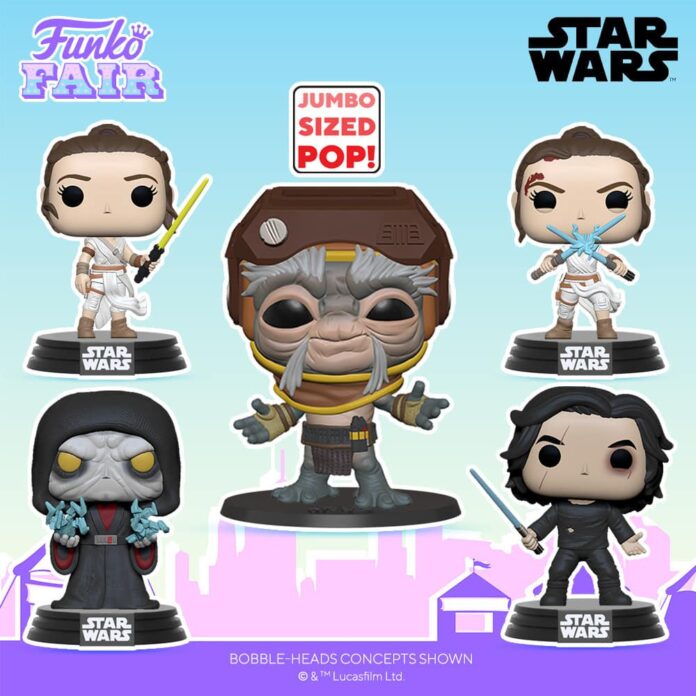 You may not be able to convince me to buy Star Wars: The Rise of Skywalker on Bluray, but their Funko Pops are a very different story. More than a year after its release, Funko has dropped a new line of figures from a galaxy far far away, as part of this month’s Funko Fair 2021 event. All of these characters have been part of prior releases but now we’re getting collectibles taken from very specific moments from the film.

Two versions of Rey are available, taken from two of the coolest scenes in The Rise of Skywalker. One has Rey wielding the lightsaber blades of both Leia Organa and Anakin Skywalker as she prepares to take down Emperor Palpatine. The other comes from the end of the movie as Rey reveals her own yellow lightsaber.

Next is Ben Solo, and they make sure not to call him Kylo Ren because he’s basically renounced that title by this particular moment. We see Solo just after he’s been passed a blue lightsaber to battle his own Knights of Ren. The figure shows signs of the damage Solo has taken, including that little hole in his ripped shirt. Poor guy! I’ve got my eye on this one. Oh, who am I kidding? I’ve already ordered it.

The revelation that wasn’t! The return of Emperor Palpatine is represented in this latest Pop, all charged up with electric Force energy to destroy the pesky Rey and Solo. He’s also got a new hood and robe, and his face is all rubbery ugliness, as if he just emerged out of a resurrection chamber or something.

Never missing a beat to cash-in on a popular favorite, Babu Frik has a new 10-inch figure that comes close to mirroring his size in the movie.