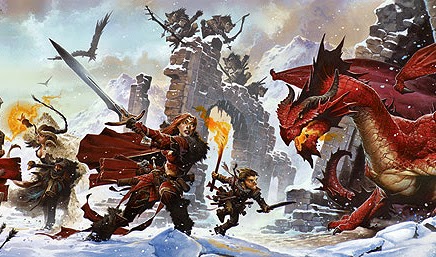 When it comes to filling the vacancy left by Game of Thrones, numerous shows have popped up in the swords ‘n sorcery fantasy realm. With The Witcher on Netflix and Amazon developing Lord of the Rings, a more obvious candidate has suddenly emerged: Dungeons & Dragons. While Paramount and Hasbro’s movie arm eOne have begun work on a feature film about the role-playing game, THR reports that a TV series is also in the workds.

Who is behind this small-screen version of Dungeons & Dragons? Derek Kolstad, writer of the John Wick franchise, has been tapped for the live-action series featuring humans, elves dragons, whose adventures are decided based on the role of a multi-sided die.

A D&D cartoon series ran for three seasons in the mid-80s and I guess it wasn’t too awful. Certainly, it was better than the awful live-action movie from 2000.

This appears to be bigger than just a single show, as well. “Multiple writers” are said to be on board developing “various projects” so this could be the beginning of a D&D cinematic universe. The question is whether the movies will be part of it, as well.

I’ve never seen the appeal of D&D in anything other than the games. While the lore is vast, part of the fun is in creating your own characters and doing things YOUR way and that’s obviously something a movie or TV franchise can’t give.