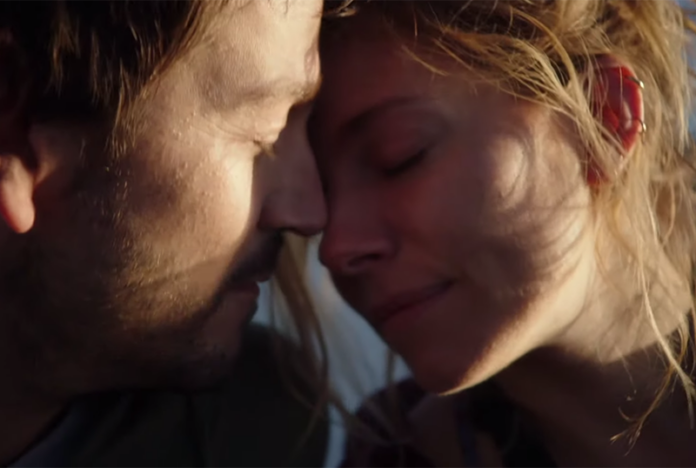 Like a grim reflection of Eternal Sunshine of the Spotless Mind, Tara Miele’s absorbing-but-unfocused Wander Darkly explores memory, trauma, and grief through the lens of a crumbling relationship. A Sundance standout, and part of Sienna Miller’s resurgence as a top dramatic actress, the film goes on a metaphysical journey through the unconscious mind, while also dabbling in supernatural mystery. There’s a lot that Miele is trying to get across, and much of it is too trippy for its own good, but is always held together by Miller and Diego Luna, whose deeply-rooted performances prove a guiding light through the madness.

Much like the title suggests, Wander Darkly is a walk through the shadowy recesses of the mind, to explore the manifestation of physical and emotional pain. Adrienne (Miller) and Mateo (Luna) are new parents, who perhaps thought bringing a child into the world would fix their crumbling relationship. With a new home to pay for, Adrienne’s intrusive mother, and Mateo’s shaky career path as a wood-worker, the couple are barely getting by. Adrienne had a traumatic pregnancy, which may be adding to the stress.

It’s during one of those scheduled date nights designed to rebuild a once-happy union that tragedy strikes in the form of a severe auto accident. What happens after is where Miele skillfully plays with the truth, as Adrienne wakes up in such a disoriented state that she’s convinced she died, and now only exists to help Mateo fight on to care for their daughter.

What Adrienne experiences eventually swirls into something else altogether, as she and Mateo journey back through their history together, experiencing events from one another’s perspective. Interestingly, neither proves to be the most trustworthy of narrators on these journeys; the mistrust and dishonesty they experienced in life follows them into…well, whatever this is. Is it purgatory? Whatever it is, the goal is to find common purpose, and find the happiness they once had. But to what end? So we see swatches of what used to be and what might’ve been; a crowded moon-lit party where they first meet, the moment Mateo first says he wants to be a father, a romantic encounter on the beach. These scenes are hazy, like memories tend to be, but also stylized to their purest essence the way we tend to glorify nostalgia and magnify ambitions.

Miele plays loose with the reality of their predicament, and what starts out resembling Eternal Sunshine begins to take the shape of similar psychological explorations, from Inception to The Science of Sleep. But in so doing, Miele also loses track of Adrienne’s motivations, which shift depending on the needs of the moment rather than through logical storytelling. There’s even a moment where the Grim Reaper appears to be pursuing her, as the film briefly becomes an It Folllows-style horror.

There are a lot of big ideas at play here, and Miele too often meanders into each and every one of them, losing focus on what Adrienne is ultimately after. When grounded by Miller and Luna, who capture the enduring love Adrienne and Mateo have for one another and their child, Wander Darkly is a gripping romance wrapped in an enigma. Miller, who is in practically every scene, captivates in a way she hasn’t in years, embodying all of the acute emotions Adrienne experiences during this bizarre conundrum. Luna’s role is more functional, but I’ve always found him to be one of the best at big outpourings of emotion, whether they be pain, passion, or tenderness. All of them are needed in this strange, bittersweet, surreal, love story that wanders too far afield before finding its way once again.