Sam Rockwell, Saoirse Ronan, Sam Rockwell. Oscar winners or nominees all, and pretty much any film that’s going to boast all three is one worth keeping an eye on. But throw in that it’s a murder mystery, which are pretty hot right now, and Searchlight Pictures might just have something special on their hands.

Deadline reports Oyelowo, Rockwell, and Ronan will star in an untitled murder mystery thriller set in 1950s London 1950s, “where a desperate Hollywood film producer sets out to turn a popular West End play into a film. When members of the production are murdered, world-weary Inspector Stoppard (Rockwell) and overzealous rookie Constable Stalker (Ronan) find themselves in the midst of a puzzling whodunit within London’s glamorous Theatreland and sordid underground.” 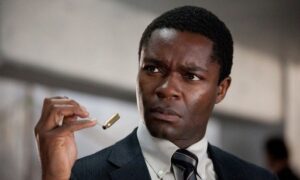 The film will mark the feature debut by director Tom George, known to some for BBC series This Country. Mark Chappell wrote the script, having previously co-created the Netflix show Flaked.

Could we be looking at the next Knives Out? Searchlight certainly hopes so.