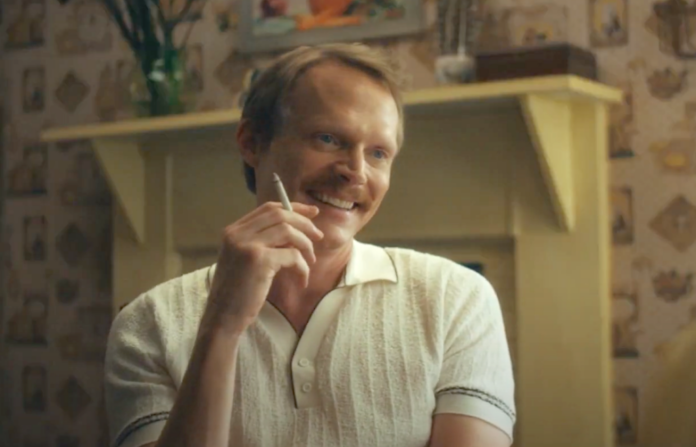 Every kid has a relative that inspires them. One that sees their potential, that might introduce them to foreign films, gives them a book recommendation or lets them have a sip of alcohol while their parents aren’t looking. One that seems so utterly cool and untouchable that a kid would live and die by their approval. The child will eventually grow up and see the adult is the flawed human that they are, but they’ll always appreciate being taken under the elder’s wing. In the new film Uncle Frank, one girl takes that journey with her uncle, discovering it’s not who you are but how you see and accept yourself that really matters.

Sophia Lillis’ Beth (I Am Not Okay With This, It) is a complete outsider to her family. Nerdy and slightly shy with a wicked sense of humor, Beth does not seem to fit in with anyone except her Uncle Frank (Paul Bettany). After spending her youth looking up to him, she eventually gets accepted at the university where he teaches and learns that Frank has been hiding his sexuality from his religious and southern family. Over the last 10 years, he has been living with his partner Wally (Peter Macdissi), a Muslim immigrant. When his tough and bigoted father dies, Frank travels back to his small Carolina town with Beth to lay his father and his past to rest.

Instead of making a movie about what it’s like to be gay, director and writer Alan Ball decides to focus on a singular story centering around trauma and shame.  Instead of focusing on the plight of LGBTQ people in the mid-century and equating it to all people in that demographic (i.e. The Help or Green Book), Ball’s writing proves it’s the details that make a story feel personal and grounded.

However, Ball’s writing also simplifies Wally’s character a bit, making him revolve around Frank and lacking any real agency. I wouldn’t go so far as to compare Wally to the “magical negro troupe,” but the characterization is still in the same ballpark. Also, the film presumes that this white 1970’s Southern religious family would have every problem with their son being gay, but none with his partner being a Muslim person of color. Maybe to delve into that scenario would take too much time, but it brings up a much larger problem of oversimplification.

Paul Bettany finally gets to shred his superhero identity and play an everyday man looking for the love of his family and himself. Vulnerable and moving, Bettany takes on Frank’s chameleon-like nature perfectly.

Rounding out the cast is a strong group of supporting players as members of the Bledsoe family. From Judy Greer, Lois Smith, Stephen Root, Steve Zahn, and character actress Margot Martindale, each cast member gets their own moment to shine and picks up any slack that Bettany, Lillis, or Macdissi left behind. The biggest crime Uncle Frank commits is its under-use of Martindale. Why put one of the greatest character actresses in your film if you’re not going to use her?

While far from perfect, Uncle Frank is a strong effort from Alan Ball. Beautifully shot with the feel of an old photograph, the film is a layered piece with a strong timely message that doesn’t preach at you.

You can watch Uncle Frank on Amazon Prime. Watch the trailer below.