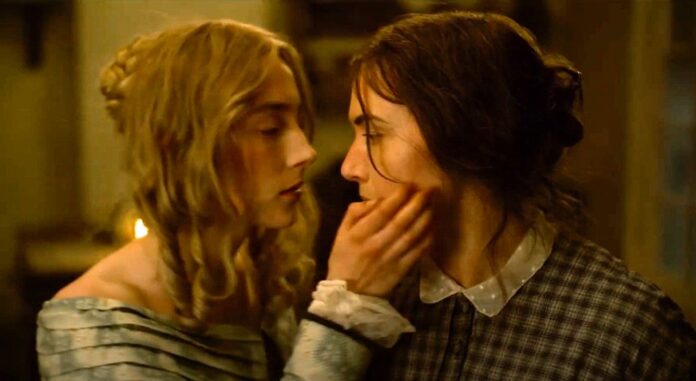 *NOTE: This is a reprint of Cortland’s review from the Middleburg Film Festival.*

Ammonites are a group of extinct marine animals, known for their shells. For centuries humans have been digging them up, cleaning them off, and displaying them in museums. In his new film Ammonite, writer and director Francis Lee, known for God’s Own Country, uses the shelled fossil as a metaphor for the hidden desires and identities of the numerous queer people who had to hide because they existed during the wrong time. Starring Kate Winslet and Saoirse Ronan, Lee takes us to the wet and cold 1840’s British seaside to tell a finely crafted love story.

When left in Lyme, England by her husband, depressed Charlotte (Saoirse Ronan) is forced to spend her days with paleontologist Mary Anning (Kate Winslet). Scouring the beach for fossils to sell, the two women resent each other’s company. Where Charlotte is rich, Mary is poor. Where Charlotte is sociable, Mary is aloof. The one thing they have in common is their incredible need for connection and someone to care about them.

While Mary Anning and Charlotte Murchison were real women who were friends, there is no historical evidence that they were in some sort of romantic relationship. Instead of letting that hinder the film’s events, the relationship that forms between the two is sure to be reminiscent of many same-sex relationships of that time. Acting as a surrogate, what happens between Mary and Charlotte rewrites the historical romance genre, focusing on the love between the two LGBTQ characters rather than the shame that often gets depicted.

While we follow the silent Mary about her life, cleaning fossils and walking along the streets, it never feels boring. Lee uses these moments to build the character, saying more with Mary’s everyday routine than her words ever could. Lee revels in these silences, the dialogue scarce.

Heavy with the onscreen metaphors, Francis Lee packs meaning into every frame. From the beetle crawling up the walls to the spiral pattern on Winslet’s bonnet, Lee does an incredible job of visually telling this story.

Winslet gives an emotive and moving performance, able to make the prickly Mary relatable without saying a single word. Ronan plays Charlotte with youthful passion and innocence, a complete turn from some of her more headstrong recent characters. Like the characters they play, their performances balance each other out, guaranteeing that at least one of them will be nominated for an Oscar.

While this film will inevitably be compared to Portrait of a Lady On Fire due to its historical beach setting and same-sex love story, it is a creature all its own. Ammonite is more restrained and subtle. Yes, this will probably be known this Oscar season for its very striking but tastefully done sex scene. Quiet, clever, and moving, let’s hope audiences focus on the humanity and meaning that pours out of the screen.

Ammonite is currently set for theatrical release on November 13. Watch the trailer below.