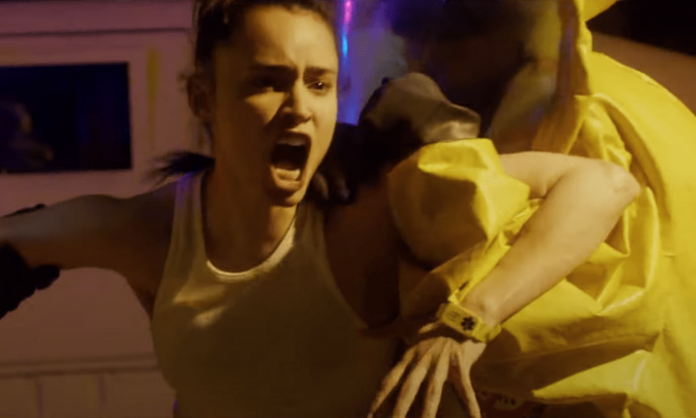 The irony of so many movies made during the pandemic? Most of them will never see time in a movie theater, because of that very same pandemic. Now you can add the Michael Bay-produced thriller Songbird to that ever-growing list.

Songbird will skip theatrical and head straight to PVOD on December 11th, according to distributor STXFilms. The price will be $19.98 for a two-day rental. The stated reason is simple. Theaters are closed. Plus, STX scored a PVOD hit earlier this year with My Spy, so why not try for another bite of the digital apple? They will also release the Gerard Butler disaster film Greenland digitally next month.

The world of Songbird is basically our own, except four years have passed, lockdowns have grown tighter, and COVID-19 has mutated into a more lethal strain. Those infected have been separated into quarantine camps, while some have fought back against the restrictions. KJ Apa plays a courier with immunity who risks all to save his lover, played by Sofia Carson, who is believed to have been infected. The cast includes Peter Stormare, Craig Robinson, Alexandra Daddario, Demi Moore, Bradley Whitford, and Paul Walter Hauser.