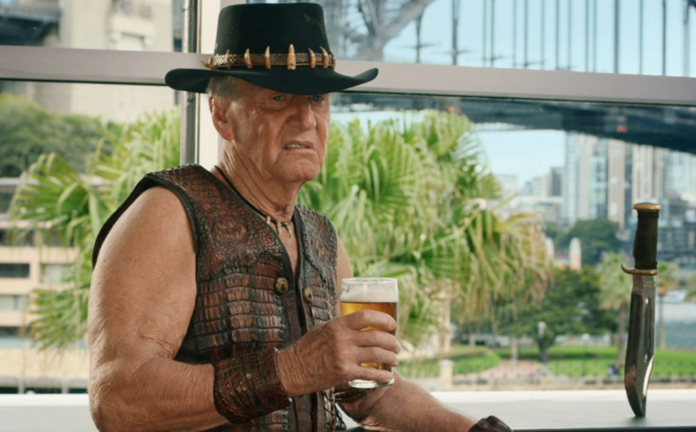 Crocodile Dundee is back. Sorta. Paul Hogan, the man who made Crocodile Dundee famous in the 1986 comedy has returned for The Very Excellent Mr. Dundee. While it isn’t an exact sequel, it serves to reintroduce Hogan as a heightened, meta version of himself. Looks old school and like a lot of fun, actually.

Hogan returns as a version of himself, who is drawn out of retirement by a knighthood by  the Queen of England, only to get wrapped up in a bunch of celebrity scandals and other misadventures. The film appears to be ripped straight out of the ’80s, and features a supporting cast to reflect that. Chevy Chase, Olivia Newton-John, Reginald Veljohnson (Who now looks like Charles Dutton!!!), John Cleese, and Wayne Knight are among the co-stars, while The Kissing Booth‘s Jacob Elordi plays Hogan’s son.

A couple of years ago Crocodile Dundee made something of a comeback in a Super Bowl ad posing as a legit sequel. It ended up featuring Chris Hemsworth and Danny McBride, neither of which is in this movie, sadly.

SYNOPSIS: Paul Hogan plays himself in this raucous comedy. Retired in L.A. and overshadowed by his Crocodile Dundee character, Hogan is offered a knighthood by the Queen of England. But before he can accept it, Hogan gets caught up in a series of comical scandals that dominate gossip shows and social media feeds. Can he keep his reputation clean long enough to hang onto his prize — and his dignity? Hilarious celebrity co-stars include Chevy Chase, John Cleese, Olivia Newton-John, and more!

‘Clifford The Big Red Dog’ Final Trailer: The Beloved Oversized Canine Will Grow On You This November

‘The Kissing Booth 3’ Trailer: Joey King Must Choose Friendship Or Love In The Trilogy’s Final Chapter