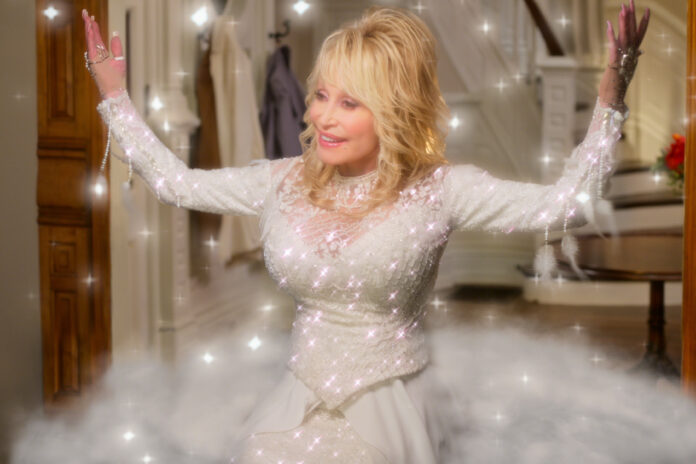 Dolly Parton as an actual Christmas angel? Christine Baranski doing her best Scrooge impression? Debbie Allen directing? And all of this in song and dance? Christmas On the Square is Netflix serving up a holiday treat far more enjoyable than grandma’s fruitcake, and as intoxicating as her egg nog.

The film features Baranski as an evil woman who returns to her hometown in the wake of a tragedy, with the plan to evict everybody and sell the land. But she’ll do it real nice-like and with lots of song, so it’ll be okay. The film features Treat Williams, Jenifer Lewis, Jeanine Mason, and more, but you’re really here to see Dolly Parton spread joy (and her wings) as an angel hoping to save the day. There’s a whopping 14 original songs, too, so expect an earful.

Allen is a legend who will probably always be remembered for her breakout role in Fame, but she’s built quite a career as a director, as well, mostly in TV. This will be her first feature since Out-of-Sync in 1995.

Christmas On the Square hits Netflix on November 22nd.

SYNOPSIS: A rich and nasty woman, Regina Fuller, returns to her small hometown after her father’s death to evict everyone and sell the land to a mall developer – right before Christmas. However, after listening to stories of the local townsfolk, reconnecting with an old love, and accepting the guidance of an actual angel, Regina starts to have a change of heart. This is the story about family, love, and how a small town’s Christmas spirit can warm even the coldest of hearts. Starring Dolly Parton, Christine Baranski, Jenifer Lewis, Treat Williams, and directed and choreographed by three-time Emmy and Golden Globe winner Debbie Allen. Featuring 14 original songs with music and lyrics by Dolly Parton.

Review: Netflix’s “They Gotta Have Us” Is Your Black History Homework This Weekend