Home Reviews Khalil Review: ‘The Queen’s Gambit’Anya Taylor-Joy Has All The Right Moves As A...
Facebook
Twitter 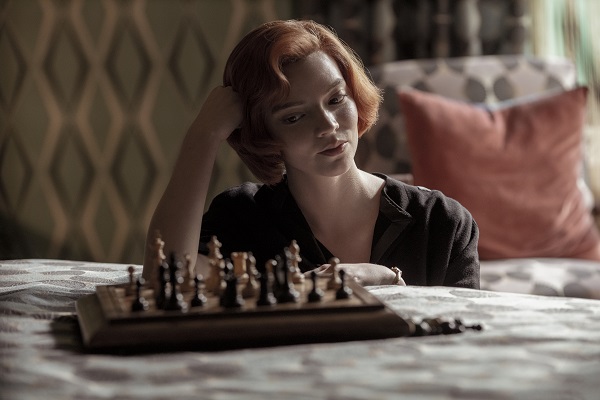 While the game of chess requires great skill, concentration, adaptation, strategy, and countless other cerebral abilities, it’s often thought of a long and boring and not exactly the engaging type of content one could expect from a Netflix Original series. However, thanks to a solid script by Alan Scott (The Preacher’s Wife, The Fourth Angel) and Scott Frank (Godless, Logan), and an outstanding performance by Anya Taylor-Joy, Netflix’s The Queen’s Gambit is riveting television.

Adapted from Walter Tevis’ 1983 novel of the same name, The Queen’s Gambit centers on Beth Harmon (Taylor-Joy), who is orphaned at a young age and while at the orphanage discovers the game of chess and is immediately drawn to the game, and becomes so good that she eventually becomes an international sensation in a sport that is mostly dominated by men…and Russians. But of course, there’s a fine line between genius and madness.

Orphaned via a car accident from her mother who committed suicide by car, Beth grows up isolated in an orphanage. Her only friend is fellow outcast orphan Jolene (Moses Ingram), who is isolated because she is a young black girl in 1950s America. Beth’s only solace is the tranquilizer pills all the orphan children are fed to go to bed, which she becomes addicted to. She discovers her only other solace when running an errand, she sees the orphanage janitor (Bill Camp) playing chess by himself. The janitor tries to shoo her away, but eventually folds and begins to teach her the fundamentals of the game, which she is able to understand very quickly, to the point that the student becomes the master. In her tranquilizer-infused dreams, she imagines chess pieces on her ceiling and strategizes way to play the game even better. This creates a hunger (for both the drugs and the game of chess) that will follow her for the rest of her life.

As she grows older, Beth is adopted by Alma Wheatley (Marielle Heller), whose husband agreed with adopting a teenage girl to keep her quiet and busy. Beth still feels isolated, but now in a new home and school setting, she continues her quest to be the best chess player she can. She enrolls in local chess tournaments and continues to excel. At first, she keeps her chess contest enrollments secret from Alma who thinks she should do activities more stereotypical for her gender, but when she realizes how good Beth is, she’s all in for Beth to shine, especially when she sees how much money Beth (and by default her) can make from winning contests. She allows Beth to call out sick from school and soon enough, joins her on tournaments in Mexico complete with drinking, drugs and sex. At what point does “excitement” become enabling?

But it’s not an easy climb up the chess ladder. Beth has to deal with the heartbreak of loss in chess and life as she struggles with her addiction and the concept of death and loneliness. These setbacks for her are rough and she isolates herself with drugs and alcohol as she feels like she’s losing her mind just like her mother did. However, her support system including former boyfriends/chess champions Benny (Thomas Brodie-Sangster) and Harry (Harry Melling) as well as reuniting with Jolene (who has an almost Magical Negro effect in the final episode) helps her get on the mend just in time for her to go all the way to Russia to face off against the world’s champion Vasily Borgov (Marcin Dorocinski) for a final showdown.

The first episode is incredibly strong as it lays the foundation for Beth as a child. Actress Annabeth Kelly, who plays the 10-year-old version of Beth does a great job as a young girl tortured by trauma and finds solace in substance abuse as well as in chess. It’s a tall order for such a young lady to tackle, but she absolutely does a great job. Bill Camp as the scruffy janitor also does great as he teaches Beth the game of chess. The Queen’s Gambit tries to teach the uninitiated how the game of chess is played, but a simpleton like me who has no idea how to play chess was still at a loss, but Bill Camp’s performance still works as he does his best Obi-Wan. Marielle Heller, who is known more for her comedic work and for directing such films like Can You Ever Forgive Me? and A Beautiful Day in the Neighborhood also does a great job as Beth’s adoptive mother who is also dealing with a loveless marriage and living vicariously through Beth, completely showing her range.

But ultimately, the star of The Queen’s Gambit is Anna Anya Taylor-Joy. She continues to show that she’s a star in the making. Her performance as Beth is captivating and she’s pretty much a shoo-in for a Best Actress Limited Series Emmy come next year. She navigates a very fine line between determination, addiction, and obsession with ease. It’s no surprise that her resume will be pretty full in the near future.

Does that mean The Queen’s Gambit is a perfect show? It’s pretty close, but does have moments where it slips. The show often navigates as a sports heroism movie and probably the best comparison is Rocky as she is a complete underdog who has to rise all the way up. However, towards the end of the show, it gets into Rocky 4 territory, complete with her going to Russia and “winning over” the population against their Ivan Drago-esqe unbeatable champion. It doesn’t feel like it works 100% as a result.

Ultimately, the production, writing, directing, acting, and the story of The Queen’s Gambit makes the show a great work of art. Each episode is directed by Scott Frank and written by both Frank and Allan Scott and takes you on a great journey of a tortured soul who just wants to escape loss, addiction, and loneliness by channeling it through doing what they are absolutely best at.

The Queen’s Gambit is available on Netflix.