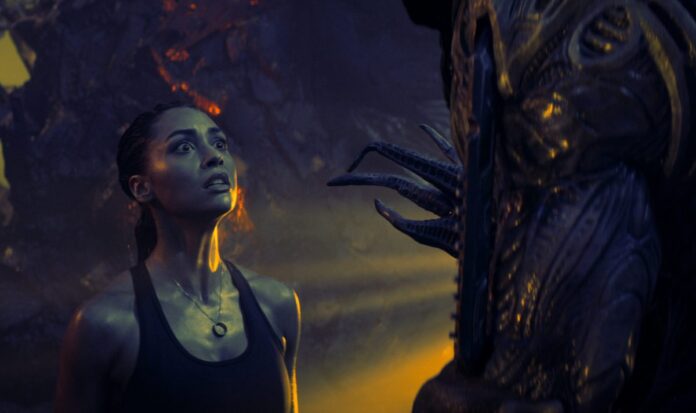 You know what, sometimes good things come to those who wait. When Skyline opened in 2010 nobody could’ve predicted the generic alien invasion film (led by Eric Balfour!) would spawn, seven years later, the gonzo martial arts sequel Beyond Skyline which featured  Frank Grillo and The Raid‘s Iko Uwais beating down extraterrestrials. It was a surprisingly awesome film that gave the unexpected franchise new life. And now the trilogy comes to an end with the hilariously-titled Skylin3s (we’re still doing that??), which is making its world premiere in London today!

Back for the third time is director and co-writer Liam O’Donnell to wrap up the story he helped, and I’ll be honest, things have gotten much nuttier since he took over, and that’s a good thing. The third film picks up a few years after the events of Beyond Skyline, which saw the human resistance join with the alien “Pilots” in peaceful coexistence. But now, with the emergence of a new threat, the Pilots could revert back to their old selves and attack humanity once again.

Wholesale changes have been made to the cast once again, and it sorta looks like the makings of a TV movie with this group. Lindsey Morgan of The 100 is joined by Deep Space Nine‘s Alexander Siddig, Boston Legal‘s Rhona Mitra, and Braveheart‘s James Cosmo. One actor who is carrying over is The Raid and The Raid 2 badass Yayan Ruhian, and you’ll never have me complaining about that. Dude is sick! Morgan is also pretty good and I’m curious to see how she does in features coming off the end of her long-running series on The CW.

Skylin3s will premiere today at London’s Frightfest Film Festival, before being released by Vertical Entertainment on December 18th. Honestly, I can’t wait.

SYNOPSIS: Several years have now passed since other-worldly blue lights first descended from the skies as the alien invasion of Earth began.The once-killer extraterrestrials known as ‘Pilots’ have had their biology altered so they can now peacefully coexist with humans on a ravaged future-Earth. When a lethal new alien virus emerges, military commander General Radford (Alexander Siddig) warns that without action the Pilots will revert to their unstoppable, human-hunting form. To save Earth, super-powered human-alien hybrid Captain Rose Corley (Lindsey Morgan) leads a team of elite soldiers on a deadly mission beyond the far reaches of space to the alien planet known as Cobalt 1. This time, to save our world, we must invade theirs.

‘Get Duked’ Redband Trailer: Amazon’s Wild Horror-Comedy Could Be The Next ‘Attack The Block’