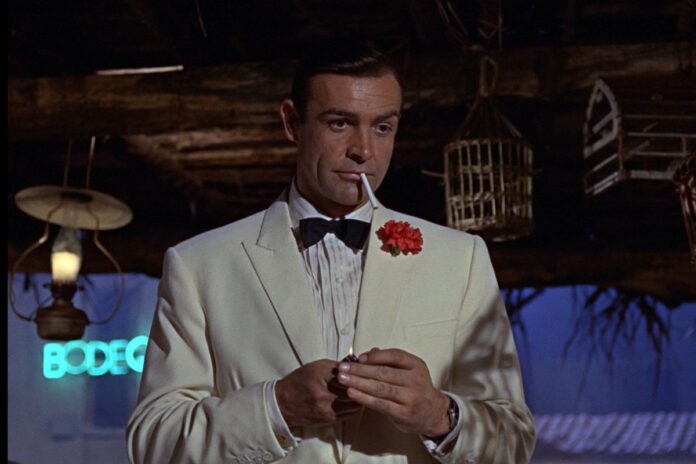 Sad news this morning as Sean Connery, the first and favorite James Bond to many, has died at the age of 90.

Connery will perhaps always be known as the first man to play James Bond on the big screen, but his decades-spanning career encompassed numerous unforgettable roles, for which he won an Academy Award and three Golden Globes.

The Scottish actor began his career as a theatre actor, bodybuilder and model, which helped him earn the sex symbol status he would carry for the next fifty years, even being named People Magazine’s Sexiest Man of the Century in 1999 at the age of 69.  His good looks and promising performances caught the attention of Bond producers who cast him to be the first James Bond in 1962’s Dr. No, for which he earned just $30K. He would go on to play 007 six more times, concluding two decades later with 1983’s Never Say Never Again, the “unofficial” Bond film titled for Connery’s early refusal to ever return to the role. By then, Connery was one of the highest-paid actors in Hollywood.

Even with Bond keeping him busy (he starred in three Bond films in two years in the ’60s), Connery found time to build his stature with roles in Alfred Hitchcock’s Marnie, The Wind and the Lion, and The Man Who Would Be King. In the ’80s, he found himself cast in a number of sci-fi/fantasy roles of varying degrees of quality. Terry Gilliam’s Time Bandits and Highlander rank high as cult favorites, while others such as Sword of the Valiant less so.

The decade ended on a high note and a role that would become one of Connery’s biggest, starring alongside Harrison Ford in Indiana Jones and the Last Crusade.  He remained so popular as the elder Jones that he had to fight off rumors of a return for Kingdom of the Crystal Skull.

Connery stayed active into the ’90s when blockbusters were plentiful. Films such as First Knight, The Hunt for Red October, The Rock, Dragonheart, The Avengers, and Entrapment (in which he steamed it up with Catherine Zeta-Jones) followed, while he turned down roles in The Matrix and Lord of the Rings.

After being knighted by Queen Elizabeth in 2000, Connery began to wind down. He scored one last dramatic hit that year with Finding Forrester, then quietly called it a career after 2003’s debacle The League of Extraordinary Gentlemen, in which he played famous adventurer Allan Quatermain. A fitting role to end on, even if the movie didn’t live up.

For me, Connery was that guy in Disney’s Darby O’Gill and the Little People, which they showed at my kindergarten constantly. It wasn’t until much later that I found his Bond films and he quickly became my favorite for a time. His line in The Untouchables, “He sends one of yours to the hospital, you send one of his to the morgue. That’s the Chicago way.” sticks in my head as an all-time great quote, but he had so many it’s hard to choose from!

We at Punch Drunk Critics send our condolences to the friends and family of Sean Connery for their loss.