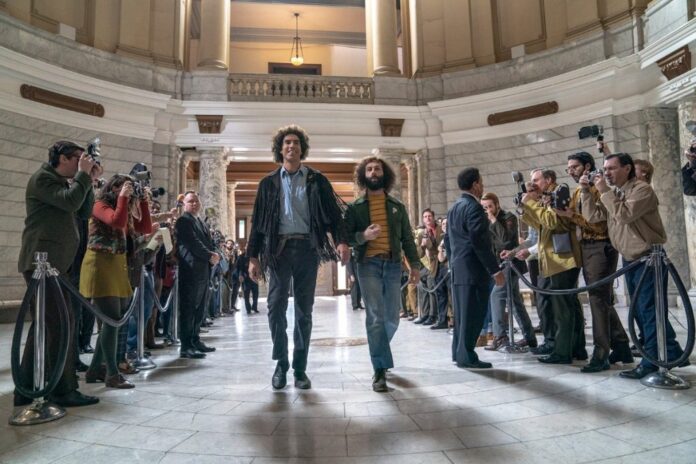 Leave it to Aaron Sorkin to energize what might’ve been a stiff, paint-by-numbers courtroom drama the way he did three decades ago with A Few Good Men. With The Trial of the Chicago 7, a snappy, star-studded treat with huge performances, Sorkin has not only reinvigorated the genre, but delivered a timely, imminently watchable protest anthem at a time of increased activism and, of course, a Presidential election.

In the works for more than a decade, The Trial of the Chicago 7 is ultimately a complete work by Aaron Sorkin, but it began as a project developed for Steven Spielberg. It then passed along to Paul Greengrass and even Ben Stiller eyed it at one point. in the end, Sorkin is the only guy who could make THIS version of the movie, one that embraces the tropes of the legal drama and wraps them in the filmmaker’s progressive politics with wit, snap, and over-the-top theatrics to match the carnival atmosphere of the trial itself.

Sorkin wastes no time, either. A quick introduction to Jerry Rubin (Jeremy Strong), Abbie Hoffman (Sacha Baron Cohen), Tom Hayden (Eddie Redmayne), John Froines (Daniel Flaherty), David Dellinger (John Carroll Lynch), Lee Weiner (Noah Robbins), and Rennie Davis (Alex Sharp), and Bobby Seale (Yahya Abdul-Mateen II) is all we need understand this hodgepodge of misfit stoners, young Democrats, seasoned non-violent activists, and one leader of the Black Panther Party.  After the 1968 Democratic National Convention, the group was arrested for inciting riots with their anti-war protests, which blew up into a public spectacle captured on television for the world to see. Chicago police battered, bruised, and arrested those who marched, but it was this small assemblage of activists who were made the public face of what the government were calling the “radical left” agenda.

Sorkin plays to the rousing, crowd-pleasing material like a seasoned pro. The Chicago 7 were quite the cast of characters, and the filmmaker’s script is quick to seize upon their quirks, differences, but also what binds them together through all of the various injustices. Abdul-Mateen II stands out as Bobby Seale, who was lumped into the group to scare white people on the jury. He knows it, too, and never lets an opportunity slip by to anger the cantankerous, show-boating  Judge Julius Hoffman (Frank Langella). Cohen, forever the comic performance artist, delivers another outstanding performance as comedian/activist Abbie Hoffman. It’s a role that requires a certain amount of nuance relative to the others. Hoffman, while always a joker, was much wiser to the game than he let on. It’s a role Cohen was born to play, as it fits his real-life persona so perfectly. Hoffman’s the first to call this a “political trial” when his more reasonable colleague Hayden just wants to work within the system.  Also terrific in comic relief is Strong as Rubin, the Yippie co-found who always seems like he’s just finished hanging out with Cheech & Chong. Everyone here is excellent, including Joseph Gordon-Levitt as wary assistant prosecutor Richard Schultz, and Mark Rylance as defense attorney William Kunstler, who struggles to keep everyone on the same page.

Whipping through the trial at warp speed, Sorkin skims the surface in order to keep things moving, but allows plenty of quick flashbacks to fill in the gaps.  It’s a messier approach than need be, but moves more efficiently than his directorial debut, Molly’s Game, and has better clarity of purpose. Sorkin’s film is meant to inspire and fire people up, from Daniel Pemberton’s soaring score to abundant speeches on democracy and freedom of speech. Fortunately, as high-minded as it can be, the film is also quite funny, with Sorkin using his quick-wit to skewer hypocrisies in the system and expose legal loopholes that exist even today.

Nor does Sorkin shy away from the violence at the heart of the riots, and I have to believe this was done purposefully to capture what could be a scene out of Portland or any major city in the country right now. Battalions of armed police officers, using every weapon at their disposal (there were these horrific trucks with barbed wire mesh on the front, something I had never seen) against those who gathered in a cause of peace. Racism played a part, as well, with Seale’s disgusting treatment by Hoffman (the Judge had him beaten, bound, and gagged at one point) becoming a rallying point for years after. Rising star Kelvin Harrison Jr. has a small role as Black Panther Party leader Fred Hampton, whose murder by police would leave an indelible mark. One wishes Sorkin could have spent more time on such an important component, but fortunately Hampton’s story is being told in full soon in another movie, Judas and the Black Messiah, opening next year. There are so many aspects to the Chicago 7 trial that Sorkin can’t see to them all, and too many characters get short shrift. More would’ve been appreciated of Froines and Weiner, who spend much of the film wondering why they are on trial and acting as if they are outside observers to it.

Sorkin knew exactly what he was doing with The Trial of the Chicago 7. It plays to Sorkin’s strengths and those of his ensemble, while delivering the spirited call-to-arms that will reverberate louder right now than in any other moment in time.