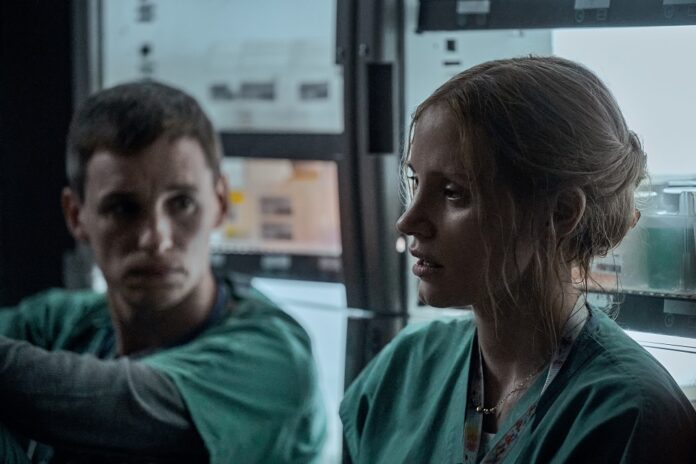 Eddie Redmayne has the kind of gentle face we can trust, right? We love him as the awkward, sincere hero of the Fantastic Beasts films for a reason. But in the new crime drama The Good Nurse, Redmayne plays someone who others put their trust in, and that trust was rewarded with murder.

Redmayne stars opposite Jessica Chastain in The Good Nurse, the incredible true story of Charlie Cullen, a nurse accused of quietly murdering dozens of his patients. Chastain plays the single mother and hard-working nurse who puts her life, and the lives of her family, on the line to stop him.

The film is based on the book by Charles Graeber, adapted for the screen by 1917 and Last Night in Soho writer Krysty Wilson-Cairns. Behind the camera is acclaimed Danish filmmaker Tobias Lindholm, best known for films such as The Hunt, A Hijacking, and Oscar winner Another Round.

Amy, a compassionate nurse and single mother struggling with a life-threatening heart condition, is stretched to her physical and emotional limits by the hard and demanding night shifts at the ICU. But help arrives, when Charlie, a thoughtful and empathetic fellow nurse, starts at her unit. While sharing long nights at the hospital, the two develop a strong and devoted friendship, and for the first time in years, Amy truly has faith in her and her young daughters’ future. But after a series of mysterious patient deaths sets off an investigation that points to Charlie as the prime suspect, Amy is forced to risk her life and the safety of her children to uncover the truth.