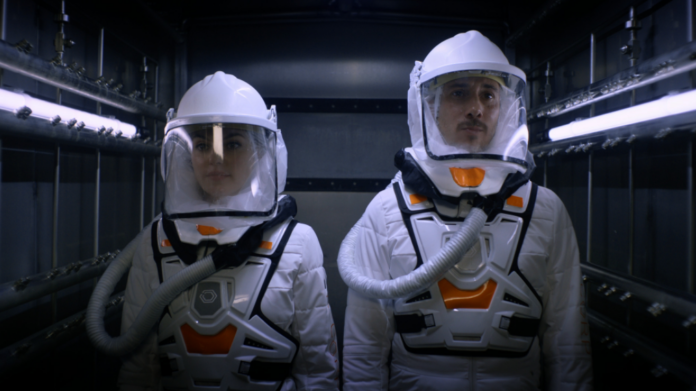 The Complex, a full-motion video game (FMV), was released on all major systems months ago. In the game, developers tout a story that leads to multiple different outcomes. The player’s choices influence the outcome, like the old Goosebumps choose your own adventure books. Following in the game’s footsteps is The Complex: Lockdown. The Complex: Lockdown apparently combines the most intense moments from the game and turns them into a film. I haven’t played the game, so I can’t judge. However, if The Complex: Lockdown is made up of the most riveting parts of the game – then I’m sure as hell glad I have not played it. 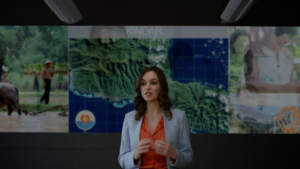 The Complex: Lockdown follows Dr. Amy Tennant (Michelle Mylett). Amy is moving up in the world. Five years prior she was helping victims of biochemical attacks on the ground in fictional southeast Asian countries like Kindar. Now she finds herself as a bigwig at K-Corp, a biochemical company that has to be corrupt. It just has to be. Amy has spent her time at K-Corp focused on creating nanocells, which are stem cells that have been combined with nanotech. The problem is they aren’t ready and are an unstable bioweapon in their present state *facepalm*. The other problem is someone broke into the lab and injected themselves with the only prototype *facepalm again*. The potential terrorist is quickly apprehended and taken to the compound where Amy is tasked with cleaning up the mess. 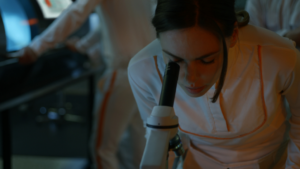 The Complex: Lockdown really doesn’t have anything going for it. The movie is full of a lot of nonsense, much of which we’ve seen in films before. We have the possibly evil corporation harboring a bioweapon. Next is ex-boyfriend Rees (Al Weaver) randomly back in the picture. Then we have Amy’s boss Nathalie (Kate Dickie) who may or may not be able to be trusted. Wrap it up with a dose of random men trying to break into the lab and you get a jumbled mess. It seemed like Writer Lynn Renee Maxcy and director Paul Raschid had a strong desire to add comedic elements to the film. Unfortunately, that led to a monster dose of Rees. There is barely a moment that goes by without Rees having a one liner. Most of them falling flat and fairly cringeworthy. 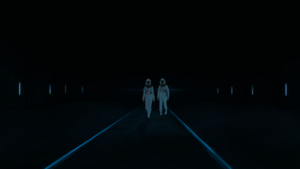 Patient zero Clare (Kim Adis) has her fair share of head scratching lines as well. The interactions between all the characters seem incredibly forced and unnatural. The poor acting throughout really doesn’t help. In addition, there is nothing that draws the audience to any of the characters in the film. No strong character development that truly makes you care about what happens to them or why. Maxcy and Raschid insert some twists into the film, that also don’t move the needle. The Complex: Lockdown just trudges along with awkward pacing, lines, and interactions. The film brings nothing to the table, but luckily does have a very short runtime…so that’s a plus. Go ahead and skip this one.