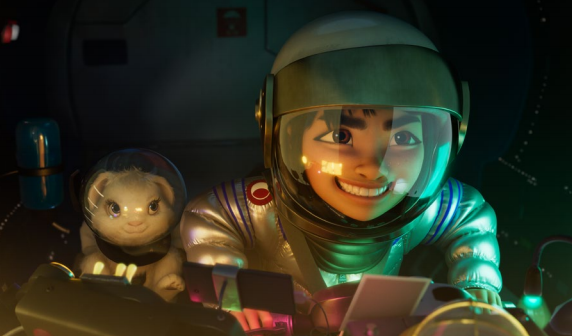 Netflix’s newest foray into the animated film space comes with Over the Moon. The film follows Fei Fei (Cathy Ang) a bright young girl who loves hearing stories of goddesses from her mother (Ruthie Ann Miles). Fei Fei’s favorite story was about the goddess Chang’e (Phillipa Soo). Chang’e drank a magical potion giving her immortality, but unfortunately her lover Houyi (Conrad Ricamora) did not. Chang’e now waits for her true love on the moon above. Fei Fei’s love of this story translates to a fascination of space and the moon in general. Her family also has a bakery where they sell their famous mooncakes. Needless to say, thinking and daydreaming about space play a big part of Fei Fei’s life. 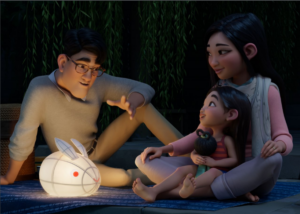 Fei Fei’s world is turned upside down when her mother passes away. Her loving father Ba Ba (John Cho) and her faithful rabbit Bungee try to get through the pain together. Four years go by and Ba Ba has met Mrs. Zhong (Sandra Oh), a new woman he’s interested in. Mrs. Zhong and her son Chin (Robert G. Chiu) – plus his pet frog Croak – are a package deal. While Chin has embraced the new relationship and wants to get closer to Fei Fei, she rejects the idea. Fei Fei doesn’t want Ba Ba to move on and forget about her mother. Fei Fei decides that she needs to get to the moon and prove Chang’e is real. If her dad will believe in the myth again then his love for his late wife won’t fade. Fei Fei builds a rocketship and blasts off in her quest to find Chang’e. 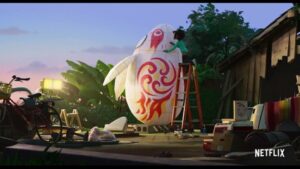 Over the Moon is an entertaining adventure from start to finish. The characters are engaging, the script is on point, and it is a joy to look at. The colors and animation pop and I found myself to be drawn into the story. There are nine original songs featured in the film as well. Many of the songs are typical of what you would expect from an animated movie, but not all. There are a few that are faster paced, and they incorporate the Asian heritage of the film. Over the Moon is able to introduce the audience to legends and stories they may not be familiar with. I had never heard of the legend of Chang’e and found it very enjoyable to learn about this myth. The film is voiced by an all-Asian cast, which helps to reinforce the authenticity of the experience.

Over the Moon is co-directed by two Oscar winners in Glen Keane and John Kahrs. The film is clearly in good hands and the two work together to produce a high-quality product. Over The Moon is also the last project for writer Audrey Wells, who passed away from cancer in 2018. The film is dedicated to her and rightfully so. The script and story are fantastic and uplifting. Producer Peilin Chou has said that it was Audrey’s “love letter she’d be leaving behind to her daughter to help her carry forth in the world.” Audrey’s husband Brian Larky also revealed that Audrey’s creed was that “love isn’t immortal, but it is eternal.” These real-life parallels of what Fei Fei’s family was going through and Audrey’s own, only strengthen the film and give it more meaning. 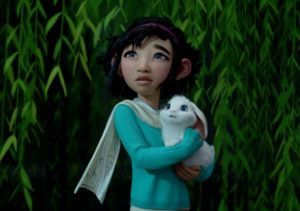 While Over the Moon doesn’t reinvent the wheel, it doesn’t need to. We still get a fun, colorful, and enjoyable adventure for children and adults that are fans of the genre. The film has plenty of good music, never drags on, and the source material makes it unique. Over the Moon also isn’t short on laughs including subtle animal looks and slapstick comedy. Certain characters, like Ken Jeong’s Gobi, main purpose seems to be comic relief. Over the Moon reaches the perfect balance of warmth, humor, and adventure. Go ahead and board Fei Fei’s rocketship, strap in, and enjoy the ride.