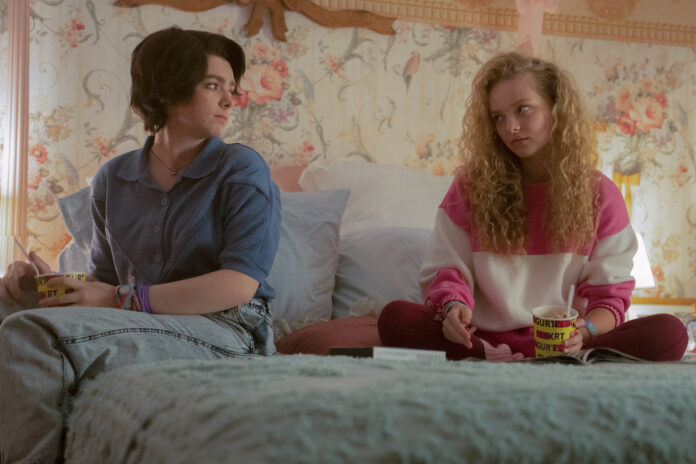 I really wanted to like My Best Friend’s Exorcism. It promised to be campy, a little scary, and was supposed to pack enough 80s nostalgia into 96 minutes as possible. While the teen exorcism comedy does fulfill the latter requirement, Damon Thomas’s feature debut is a corny and mediocre snapshot of the horrors of female friendship.

Eighth Grades’ Elsie Fisher stars as Abby Rivers, a Catholic school scholarship student who spends her weekends drinking and spending time with her best friend Gretchen (Amiah Miller). The two decide to spend one weekend with their frienemies Glee (Cathy Ang) and Margaret (Rachel Ogechi Kanu) at a secluded lake house. When the two decide to leave the group and explore the abandoned and supposedly haunted house next door, Abby unintentionally leaves Gretchen behind.

When the two are reunited, Abby notices her friend looks terrible and her behavior soon matches, causing physical and psychological harm to her group of friends. Abby eventually figures out that Gretchen is posessed by a demon and decides to enlist the help of a Christian bodybuilder to help exorcise her.

Director Damon Thomas is no stranger to intense suspense. He is known for directing british dramas including Killing Eve and Penny Dreadful. While he somewhat captures the complexities of female friendship, he fails to find any comedy lerking within the film’s premise. By the time we meet Chris Lowell’s goofy Christian mall bodybuilder, Abby has only just figured out something dark has hold of her friend. At this point, we are 70% of the way through the film.

My Best Friend’s Exorcism is based on Grady Hendrix’s independent cult novel of the same name. It was lauded for its similarities to Heathers and treading the line between horror and comedy. The film adaptation fails to capture the nuances that made the book special. It does lean into Heathers territory (Margaret is a bit of a bitch), but without any of the fun. Overall, Thomas and Jenna Lamia’s script sucks the life out of Hendrix’s original story, leaving the husk of what could be.

My Best Friend’s Exorcism is streaming on Amazon Prime. Watch the trailer below.