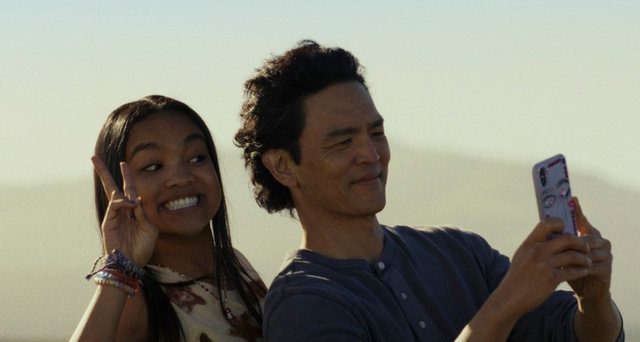 Don’t Make Me Go. The title almost sounds like it belongs to a horror movie, not a sentimental road trip film. And perhaps it does sound horrific for a young, independent teen to be be dragged on a cross-country journey with her overprotective father. But short of an accidental stop at a nude beach, the only thing scary about this father/daughter trek is how good the chemistry between John Cho and relative newcomer Mia Isaac is, helping to elevate this small-ish, familiar drama above expectations.

Hitting Amazon’s Prime Video on July 15th, Don’t Make Me Go stars Cho as Max, a wildly overprotective single Dad caring for his daughter Wally (Isaac). And care for her he does, by living an extremely careful, and thus very dull existence with zero risk. Of course, Wally rejects all of this, and strikes out in the way that teens do, by pushing boundaries and lying. Their bond remains tight, but when Max learns that his headaches are caused by a brain tumor, he decides he’d rather spend whatever time he has left with Wally. This despite a very risky surgery with a tiny chance of success. So he convinces/blackmails Wally into hitting the road with him to attend his 20-year high school reunion, and maybe introduce her to Nicole, her mother who bailed years earlier.

This is all well-worn terrain. On the journey, of course, Max and Wally learn more about one another but also themselves, bonding as they never have before. But there’s a twist that spices things up, and that the script plays with nicely. Max doesn’t tell Wally about his condition, in hopes that either her mother or his relationship-averse girlfriend Annie (Kaya Scodelario) will be there to step in when he’s gone. There’s also the matter of Dale (Jemaine Clement), Max’s former best friend who ran off with Nicole. They’re no longer together, but the reunion is still heated, which leads to revelations about Max that Wally never could’ve predicted.

While Don’t Make Me Go isn’t exactly breaking the genre mold, it doesn’t always follow the expected path. By refusing to be overly sentimental, the film is free to veer off in unpredictable directions. It doesn’t hurt that Cho is one of the most believable actors working today, and his scenes with Isaac, who I don’t recall ever seeing before, are fantastic. They’re funny when needed to be, but are even better when the moment calls for deeper emotions to shine through, as happens later on in the film. The surrounding cast are uniformly excellent, as well. As something of a Kaya Scodelario superfan, I was worried that Annie would be too thin of a role for her, but Scodelario makes her feel like a real, flawed person in an unfamiliar situation. Every single character has been tossed into the deep end of a circumstance they weren’t emotionally prepared for. It’s something almost everyone can relate to, and it’s navigated with heart and humor that makes Don’t Make Me Go a gem to be discovered on Prime Video.