James Gunn and John Cena’s Peacemaker series is adding another cast member from The Suicide Squad, and a frequent collaborator of Gunn’s. Deadline reports Steve Agee, who has two roles in the upcoming antihero film, has joined the HBO Max show.

Agee will reprise his The Suicide Squad role as Belle Reve Penitentiary warden John Economos. He also plays, but will likely go unrecognized, as team member King Shark. Economos isn’t exactly a major character, but Gunn has a tendency to cast those he’s worked with a lot in flashy roles that everyone remembers. Economos is a sidekick to Viola Davis’ Amanda “The Wall” Waller, and I’m guessing he’ll be introduced as a complete stooge with some really funny lines. How he fits into the Peacemaker series is unclear, however.

Gunn has previously cast Agee in Super, Guardians in the Galaxy Vol. 2, and Brightburn so it’s not a surprise he got a call. 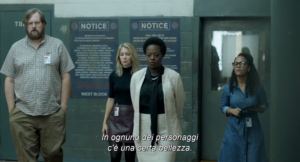 Peacemaker will run for eight episodes with many of them directed by Gunn. The series will “explore the origins of the Peacemaker character, the master of weapons from the highly anticipated upcoming The Suicide Squad film.”

The Suicide Squad opens August 6th 2021, with Gunn then jumping straight into Peacemaker before he starts on Guardians of the Galaxy 3.

And we can’t wait to put John Economos on the small screen. So much more cool casting news to come! #Peacemaker https://t.co/xbmqlFUAzw