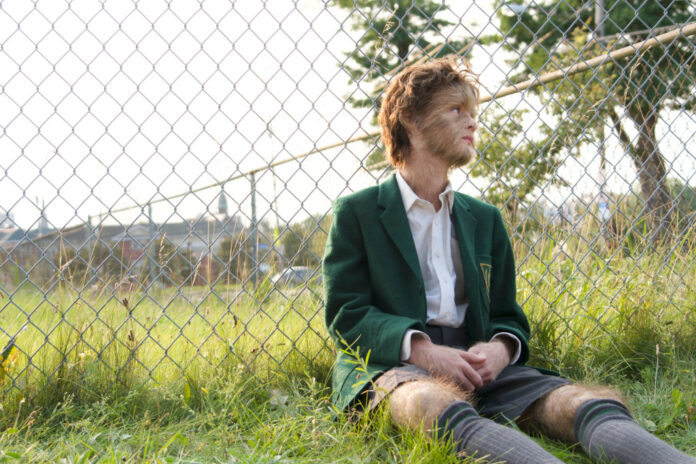 At a time when demonizing the “other” is running rampant, a heartwarming film about self-acceptance is a welcome treat. The True Adventures of Wolfboy is such a film, a Tim Burton-esque coming-of-age fairy tale full of misfit characters, deadly villains, and a surreal journey to uncover the truth. That the central character looks like a wolf only adds to the storybook quality of Martin Krejcí’s directorial debut, which features a number of strong performances.

Jaeden Martell, who in films such as It, The Book of Henry, and Midnight Special has cornered the market on melancholic social outsiders, plays the titular Wolfboy, Paul. The 13-year-old suffers from a condition that causes his face and body to be covered in thick fur, making him a pariah to most kids and a target for bullies. Chris Messina plays his understanding-but-struggling father, who encourages his son to get out there and be himself, sans mask to cover up his face. A trip to a traveling circus goes upside down when Paul attempts to do so and the bullies humiliate him.

Before Paul’s father can ship him off to a special school (this sounds like the start of a superhero story or something), he receives a note claiming that he’ll find all the answers he seeks in Pennsylvania. Thinking the note belongs to his wayward mother, Paul runs away and so begins his fantastical and charming journey full of twists, turns, and even a crime spree.

Essentially a road movie, Paul’s quest finds him learning harsh lessons about the real world at every stop. In some ways, his discoveries mirror those of Pinocchio as he figures out what it means to be a real boy. In an early instance, Paul finds himself under the sway of a con-man and carnival barker named Mr. Silk, played with menacing flourish by John Turturro. Silk casts Paul as his circus freak star attraction, a temp gig that goes up in flames.

The film takes on more complex notions, and also finds its root message, in the friendship between Paul and Aristiana. Played with early Chloe Moretz-levels of wisdom by Sophie Giannamore, Aristiana is a trans girl who has come to accept who she is and love herself, despite her unaccepting mother who insists on treating her like a boy. Penned by trans writer Olivia Dufault, The True Adventures of Wolfboy hits home in its defiance of letting other’s cruelty define one’s self-worth.

As a key figure says later on in the film, “The world’s gonna be mean to us no matter what we do, so we can’t afford to be mean to ourselves.”

The film loses its way a touch when the unruly one-eyed Rose (Eve Hewson) takes them on a crime spree. While the mischief they get into is a much-needed dose of fun, the ensuing police investigation snaps us back harshly into reality, when this story really needs to strike a gentler balance. Turturro’s Mr. Silk has a similar problem, in that he has a mustache-twirling villainy which is too cartoony to fit and undermines what should’ve been a tense final showdown.

Combined with a hypnotic score by Nick Urata and cinematography by Rich Hill co-director Andrew Droz Palermo, The True Adventures of Wolfboy beautifully captures the lively spirit of young people looking to find the light in a darkening world.