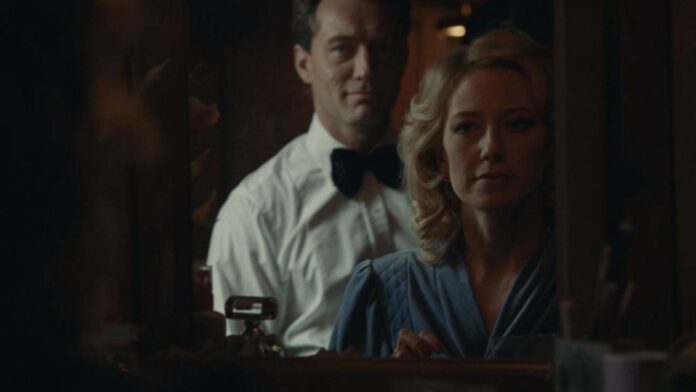 The opening moments of Sean Durkin’s devastatingly precise family drama The Nest are shot almost like a horror movie. Cinematographer Mátyás Erdély (Son of Saul) frames the exterior of the O’Hara’s suburban home like we’re expecting Jason Voorhees to come stalking out of the bushes. Going in, I assumed Durkin, who was a huge star here in 2012 with his Sundance debut Martha Marcy May Marlene, was indeed giving us a horror movie in which awful, strange things would occur. The Nest is indeed a horror, but there are no slashers in hockey masks, just the dismantling of a close-knit family unit whose happiness is merely a facade.

On the surface, the O’Hara’s- Rory (Jude Law), wife Allison (Carrie Coon), children Sam (Oona Roche) and Ben (Charlie Shotwell), appear to be a happy, typical 1980s American family. The two siblings poke fun at one another lovingly, Dad drives them both to school and plays with them during the evenings, husband wife are happy in their respective careers. He does something in the realm of investments, she trains horses, clearly a passion for her. If anything, they are excessively happy, and Durkin lingers on their daily movements coldly from afar, as if looking for the tiniest hint of a crack.

It isn’t long before they begin to form. It begins with Rory’s sudden, desperate plea for the family to uproot itself and move to London. Allion’s quick response, to ask if they are okay financially is another sign, as is Rory’s dismissive response that all is fine. It’s their fourth move in ten years, something is not fine. It’s also strange how everyone around them, including Allison’s mother, immediately acquiesces to Rory’s demand. There’s a cult-like pall hanging over the O’Hara’s that wasn’t there before and Durkin leans into it unnervingly.

Rory talks a lot, he’s always got some larger-than-life plan in the works, a story to tell that puts a shine on him. Before the family has joined him he’s already bought a huge mansion, complete with Led Zeppelin stories and centuries-old floorboards. He says it’ll be perfect for Allison to start her own business, and for him to start making some real money again. The kids have been enrolled in only the finest, most expensive schools. The O’Hara’s look like big shots. Allison’s beloved horse Richmond is purchased and flown over, as well. What could go wrong?

This veneer of success is built on fragile ground, and Durkin has us watch it fall apart cruelly. Rory’s big mouth doesn’t serve him as well as it did in the States, and when a major deal falls apart, leaving him financially unstable, his entire world shatters. Allison is restless, unable to fit in to a culture she’s unfamiliar with; the children, also on unfamiliar terrain, waver between despondency and rebelliousness, both with disastrous results. When the bills start going unpaid, Allison grows increasingly frustrated at Rory’s little white lies that spin into big ones.

Durkin pays homage to the time period without ever having to flash an “MTV” logo on a TV set. A plethora of ’80s synthpop clashes fascinatingly with the bitter proceedings, highlighted by a brilliant scene where a luminescent Allison dances wildly in a club to Thelma Huston’s “Don’t Leave Me This Way”.  The “Greed is Good” era of Reaganomics is just one of many subtle references to the time, with Rory a living embodiment of that toxic principle. The Nest is, in its way, a cautionary tale with lessons as rich as you’ll find in any old Frank Capra movie. This move, which was meant to be yet another fresh start for the family, finds none of them doing better than they were before. They had been comfortable and happy, but for some people being comfortable isn’t enough. They feel entitled to it as if the world owes them, and this poisonous materialism is quick to spread like a cancer.

Just as Arcade Fire’s Richard Reed Parry delivers a perfectly somber score that underlines the family’s delusions, the performances are calibrated to match their growing unease. This movie belongs to Carrie Coon, whose Allison is always spring-coiled on the verge of a breakdown. Coon expresses Allison’s frustration in minute detail; watch the imperceptible shift of her mood during a fraught dinner scene in which Rory’s dishonesty becomes too much to bear. Law is also good, if a bit hammy, as a guy who thinks wealth is the only measuring stick for greatness.  The Nest is a more successful effort than Durkin’s previous, delving deeper into the delusions that, when exposed, can rip a family to shreds at the slightest bit of pressure.