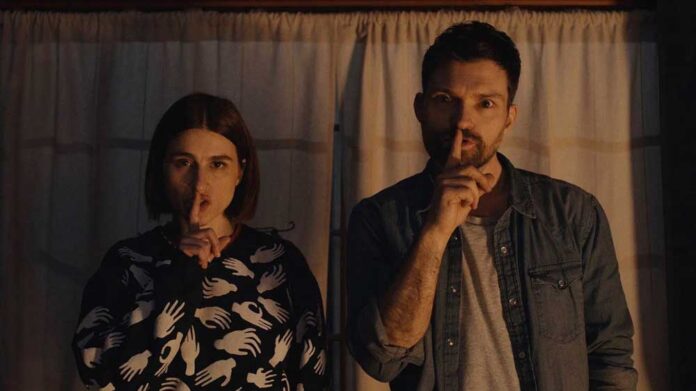 This might be the year of Aya Cash. If you dug her fierce brand of humor in FX’s You’re the Worst, Cash will be taking it to another level in the second season of Amazon’s The Boys, playing a fascist “superhero”. Earlier this year at Sundance she starred in one of the festival’s most talked-about movies, Scare Me, a clever dark comedy that’s a perfect fit for the horror enthusiasts at Shudder.

Scare Me has a simple premise, but what takes you by surprise is how it escalates out of control. Cash and writer/director/co-star Josh Ruben play a couple, stuck inside a cabin in the woods when she comes up with a game they can play.

“Scare me. You scare me and I’ll scare you.”

From the beginning it’s clear that she’s wearing the pants in this relationship, and she doesn’t scare easily.

And try he does. But she gets a turn, too.

The cast also includes SNL vet Chris Redd and comedian Rebecca Drysdale. The film marks Ruben’s directorial debut and I have a feeling he and Shudder are going to be in business together for a long time.