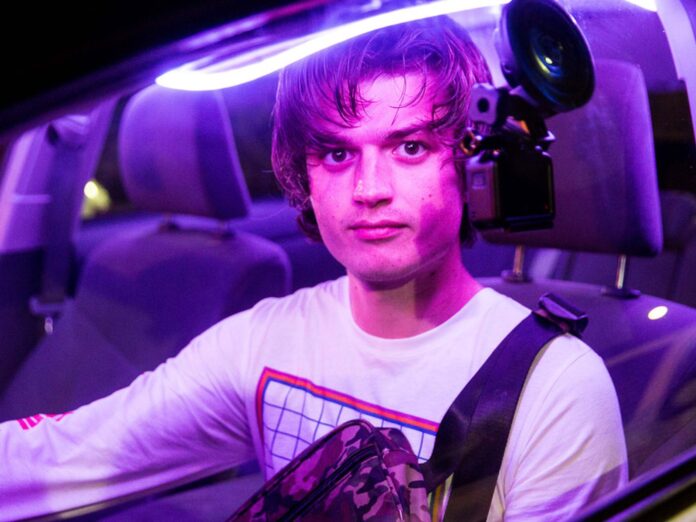 The age of social media celebrity, and the unfortunate confluence with a rise in violence captured on cell phone, has led to a new genre of nihilist cinema. Think of it as a modernized take on Natural Born Killers or Bonnie & Clyde, where fame is gained through murderous rampage, branded and live streamed to a willing audience just waiting to shoot you a “Like” or give you a “Follow.” Writer/director Eugene Kotlyarenko’s Spree, a buzzy title that premiered at Sundance early this year, is only the latest to set a marginalized, wannabe Youtube superstar into the role of homicidal savior for the Twitch crowd.

So while the idea of Spree is hardly new, it has quite a lot going in its favor. The first is Stranger Things loverboy Joe Keery as the overly-earnest bordering on desperate unfortunately-named Kurt Kunkle. I’m going to assume that his name sounds as goofy as Taxi Driver’s Travis Bickle is just a coincidence, but then again probably not.  Kurt’s been toughing it out with his super-lame @Kurtsworld96 brand, barely snagging any new follows and definitely nothing viral over ears of self-hype videos and pathetic pleading.

In a crash course montage, we see that Kurt’s actual world kinda sucks. He barely tolerates his drug-addicted DJ of a father (David Arquette), and hovers around popular social media influencer @bobbybasecamp (Josh Ovalle), an arrogant kid who Kurt used to babysit. Bobby has figured out how to build his brand through a variety of staged gimmicks and stunts; Kurt wishes he could “find himself” that way.

Kurt comes up with a plan he thinks will work. Taking advantage of his side-hustle as an Uber-like Spree driver, he comes with a scheme he brands #TheLesson, in which he covertly murders his customers live on-camera. But to his amazement, Kurt discovers that nobody really seems to care that he’s killing people, because HE is still pretty lame. The revelation drives him to up the body count in greater, more gruesome ways, ultimately becoming fixated on rising star comedian Jessie Adams (SNL‘s Sasheer Zamata), who has a huge Instagram following but is having doubts whether she wants that kind of fame.

Keery’s over-the-top exuberance as the deeply amoral Kurt Kunkle matches the chaotic split-screen blend of natural filmmaking with found-footage techniques and the picture-in-picture style of movies like Searching and Open Windows. It’s an appropriately disorienting experience, one that lends itself to the movie’s mix of horror and satire.

Spree‘s examination of the social media pecking order is less scalpel-like and more like a meat cleaver, slashing and burning every which way. Mostly, that works in its favor as Kotlyarenko rips into Kurt for his bloody devotion to Internet infamy, but also those who revel in the movie’s violence, the same violence Kurt thinks will deliver him the RTs and Likes he’s been craving. Kurt is an interesting case, as the entirety of his every interaction amounts to sizing up their worth to his audience. When a passenger turns out to be a white supremacist, Kurt doesn’t disavow him because it’s the right thing to do, but because viewers might not like a racist. Other encounters like this follow, but it’s a soft-peddle step by Kotlyarenko that all of Kurt’s victims are just as deplorable as him; racists, misogynists, Mischa Barton, Ariana Grande’s hyper-annoying big bro. We don’t care much when they bite it.

Kotlyarenko is considerably less focused when looking at Jessie and her view of Internet fame from a view at the top. Having built her fanbase with the catchy “All eyes on me!” slogan, her frequent encounters with Kurt, a chauvinist a-hole, and a grabby colleague (played by Zamata’s SNL pal Kyle Mooney) begin to change her thinking whether it’s good to always be seen. But her evolution is inconsistent, sporadic, and eventually discarded in a way that might fit the movie’s cynical view even if makes little sense from a storyline perspective.

Keery has always been my least favorite part of Stranger Things, but here he nails Kurt’s sad, manic, hilarious descent into serial killer land. If there’s anything scary about Spree, it’s the way it mirrors real-life instances of tech-influenced murder, including a series of killings by a rideshare driver in 2016. Otherwise, the film is an enjoyably brazen attempt to court controversy and get itself noticed. Kurt Kunkle would be proud.