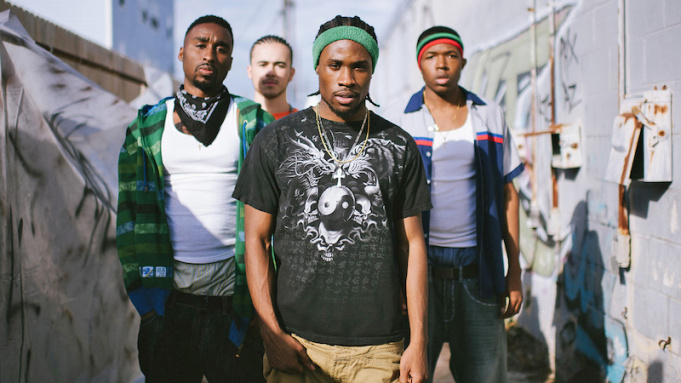 The Wizard of Oz plays an unexpectedly large role in RZA’s New Orleans crime epic, Cut Throat City. The second film in days set in a dreary post-Katrina existence, the other being Netflix’s Project Power, both deal with marginalized people trying to find their way home, and a true power behind the curtain that stands in their way. RZA, in his third directorial effort, captures the desperation and despair of a Lower Ninth Ward that was drowned by the flood waters, then left to fend for itself in a cesspool from which few can escape.

Cut Throat City is a massive movie with equal aspirations, so many that it simply collapses under the weight and falls back on familiar characters with familiar goals. But the story it tells, a gritty saga of an aspiring artist who sees his hopes dashed by forces beyond his control and a government stepping on his neck, strikes home for anybody with big dreams that went sideways. The artist in question is Blink, played by Dope and Into the Spider-Verse actor Shameik Moore. Blink has big dreams of being a comic book artist, and has the skills to do it, but finds that nobody gives a damn about his pictures in the Lower Ninth Ward. His pencils might make pretty pictures, but they don’t put food in the mouths of his wife Demyra (Kat Graham) and child.

Blink rolls with a crew who aren’t faring any better. Miracle (Demetrius Shipp Jr., still a 2Pac doppelganger in a role very inspired by the film Juice) is a small-time drug dealer with no place to stay; Junior (Keean Johnson) seems to care only about his dog; and Andre (Denzel Whitaker) is a jazz trumpeter who has found it hard to score gigs when all of the clubs are gone.

One thing quickly established in Cut Throat City, and it’s a theme that runs throughout, is that doing the right thing doesn’t mean shit. All of the haves are criminals, some worse than others, and the have-nots have tried to play it straight with nothing to show for it. Blink and Demyra find that applying for FEMA aid is worthless. The government is everywhere, either dressed in blue or dressed in suits, but there’s no help coming. So Blink and his boys do the only thing they can do which is turn to Cousin Bass (T.I. Harris) and a life of crime. Bass, a cousin to Blink’s wife, doesn’t give a shit about family ties. He sizes them up quick; comparing each to a character from The Wizard of Oz…

“I guess that makes you Dorothy”, he says to a wary Blink.

If Blink was wary then, it only gets worse when Bass punishes a debtor by unleashing a wild opossum on the man’s…*ahem* manhood, the payment for owing him money and being unable to pay. It’s as severe a warning as can be delivered. You get into this game, and you lose? This is what you’ll get.

Of course, the crime, a brazen casino heist, does not go flawlessly. There is violence, there is death of a loved one, but worse, Bass and his friends have attracted all of the wrong attention. Crooked cops, Bass, corrupt politicians, and worse are all looking for them, but all Blink wants to do do is get home. Along the way, larger-than-life characters will cross their path, not unlike the figures from a fairy tale story.  Wesley Snipes plays Blink’s wayward father, a good man who tried to do right but nevertheless left his son and mother behind. Ethan Hawke, who plays Nikola Tesla in another film out this week, is Jackson Symms, a former detective turned mysterious power player who straddles the line between good and evil. It’s an unexpected role for Hawke, whose character delivers poetic words about the way he, and others just like him, built their fortune on New Orleans’ pain. Eiza Gonzalez’s performance as detective Lucinda Valencia is pulled right out of the TV cop playbook, and it works when so many characters fit neatly into a box.

One exception is Terrence Howard as The Saint, a colorful, well-dressed rogue whose name is clearly a slight of hand. Perched inside his headquarters, a former French Catholic church which he now uses to peddle drugs, The Saint’s flamboyance breaks through the hard-scrabble veneer. The man is clearly a snake, it’s just a matter of who he bites and when, making him one of the most intriguing figures Cut Throat City has to offer. It’s just unfortunate he arrives so late in the game.

This is only the half of what’s going on in Cut Throat City.  The busyness of it goes a long way in making RZA’s vision of New Orleans feel alive and exciting, with rewarding detours into the city’s rich mythology. Eventually, having so many moving parts becomes a hindrance as he and screenwriter Paul Cuschieri scramble for a meaningful conclusion, settling on one that tries, unsatisfactorily, to have it both ways.