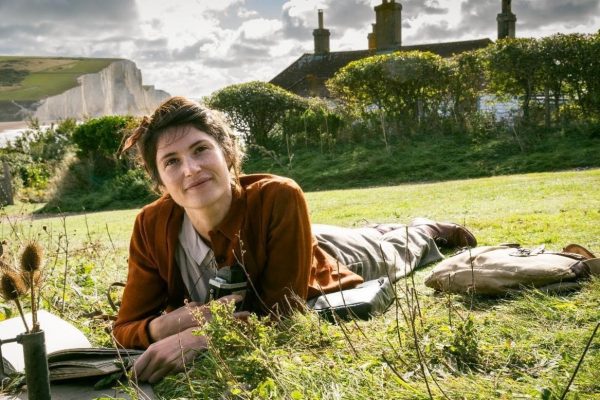 The title Summerland comes from the Norse myth of a heavenly afterlife, in which the souls of lost loved ones linger on. It’s a heartwarming, sweetly-constructed notion that fits with the overall tone of award-winning playwright Jessica Swale’s directorial debut, a wartime love story that features a reunion with actresses Gemma Arterton and Gugu Mbatha-Raw, who starred as the title character of her play, Nell Gwynn. Genuine performances from both lift Swale’s wholesome wartime drama, which despite the setting and tale of forbidden romance is so light it could float away.

Summerland establishes exactly what it’s going to be right from the start. It’s 1975 in the picturesque coastal town of Kent, and writer Alice Lamb (Penelope Wilton) is banging away at her keyboard and screaming at the neighborhood children. It’s established very early on that Alice does not like kids, so when time rewinds a few decades and we see that she didn’t like them even then, it’s clear this will be a movie built on explaining why she’s such a curmudgeon. Arterton plays the younger Alice, who spends her tie writing on mythology and folklore, in particular, an “island in the sky” fata morgana phenomenon which looks like a pillowy castle surrounded by clouds.  The townspeople don’t care much for Alice. The housewives don’t understand why she’s lived in that cottage of hers all by herself, the men seem to have no interest in someone as attractive as her (and she no interest in them), and the kids all think she’s a witch.

There is a war going on, though. The constant threat from the Luftwaffe finds evacuated boy Frank (Lucas Bond) on Alice’s doorstep. A series of comical mishaps have led to her being the boy’s guardian as part of Operation Pied Piper, and the cold steel of emotional armor Alice wears is unlikely to stand up to the child’s innocence and earnest attempts to gain her affection.

Why is Alice so closed off from the rest of the world, at a time when most are clinging to one another for hope? Flashbacks to a happier time reveal the great love that got away, Vera (Mbatha-Raw), who she fell in love with while studying at Oxford. The passion they had for one another was undeniable but sadly not meant to be. At at time when such relationships were frowned upon, Vera also couldn’t give up her dream of being a mother in a “normal” heterosexual family. Poor Alice has nursed a broken heart ever since, until Frank showed up her doorstep and began to stitch the pieces back together.

As the title suggests, Summerland pops with sun-kissed locales and shimmering colors, reflecting the light that has begun to shine in Alice’s soul. The bond she begins to form with Frank amounts to a lot of fluff, a couple of beachside excursions, a bruised knee, and little else. Sadly, this could’ve been a more challenging film than it turned out to be given elements Swale has thrown together. Alice and Vera’s lesbian love is painted as a sugar-coated affair of furtive glances, giggly conversations, and a single kiss, with little actual confrontation on the issue. Given this is also the 1940s there might’ve been some discussion of their interracial romance and the challenge that might bring on top of what they already face.

Reality rarely intrudes on this surreal fantasy, and when it does is usually as a contrivance. War hits Alice and Frank tragically hard at one point, but it only stands to serve up a series of convenient plot devices, leading to a fairy tale ending so easy you might overlook how distasteful it is. Arterton has at this point mastered the art of playing the beautiful British social misfit, whose emotional flaws far outweigh her allure. She reveals Alice’s vulnerability in the face of Frank’s fear and naivete, and it comes through in their awed discussions of the divine wonder. This is a story about Alice and Frank, and so Mbatha-Raw doesn’t get nearly enough time as Vera. She’s more of an idea than anything, with Vera representing what happiness could’ve been like for Alice, and Frank someone who enters life when she needs it most. T

Summerland is a beautiful confection, so light and airy it’s a wonder these characters don’t actually live in their own little slice of Heaven.