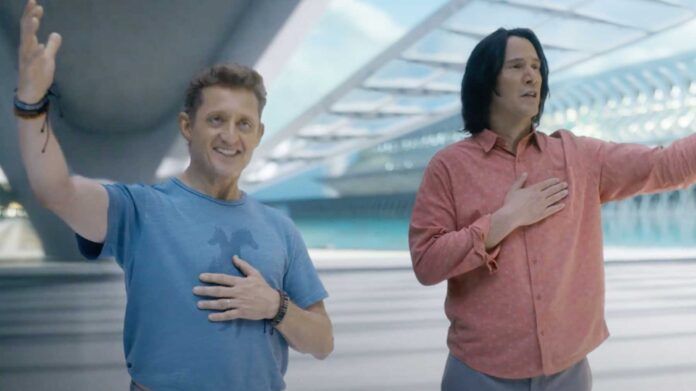 Leave it to Bill & Ted to refuse to stay put in one time and place. Just days ahead of its Comic-Con @ Home panel kicks off, Bill & Ted Face the Music has found itself a new release date, and will hit select theaters and VOD on September 1st. This seems like a perfect drive-in movie, doesn’t it?

A brand new trailer accompanies the change in release, giving us a new look at Keanu Reeves and Alex Winter, reunited as the totally rad dudes William “Bill” S. Preston Esq. and Theodore “Ted” Logan, as they try to fulfill the rock & roll destiny put forth to them in the two prior cult classic films.

SYNOPSIS: The stakes are higher than ever for the time-traveling exploits of William “Bill” S. Preston Esq. and Theodore “Ted” Logan. Yet to fulfill their rock and roll destiny, the now middle-aged best friends set out on a new adventure when a visitor from the future warns them that only their song can save life as we know it. Along the way, they will be helped by their daughters, a new batch of historical figures, and a few music legends – to seek the song that will set their world right and bring harmony in the universe.

The film is directed by Dean Parisot (Galaxy Quest) with a cast that includes Brigette Lundy-Paine, Samara Weaving, Kid Cudi, Jillian Bell, Anthony Carrigan, plus the return of William Sadler as the Grim Reaper.