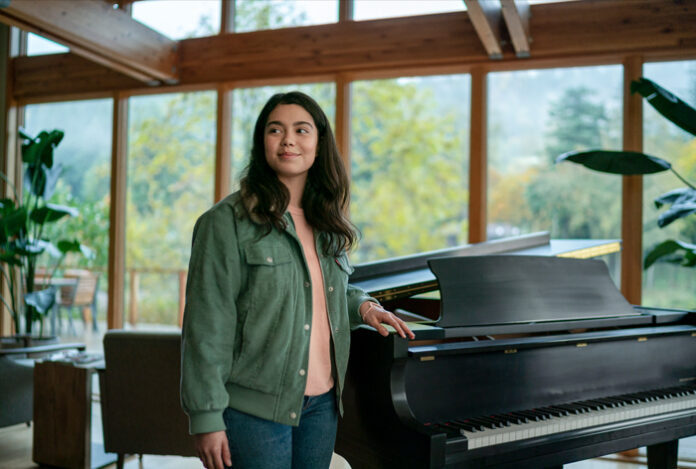 Voicing Disney’s first-ever Polynesian princess in Moana was the breakthrough role for Auli’i Cravalho, but since then she has only been seen in a handful of TV shows. Now she has a movie all to herself thanks to Netflix with All Together Now, directed by Hearts Beat Loud filmmaker Brett Haley.

Netflix has revealed the first look at All Together Now, which was originally-titled Sorta Like a Rock Star, based on the book by Silver Linings Playbook author Matthew Quick. Miguel Arteta (Cedar Rapids) was the first director attached, only for it to switch studios and move to Bryce Dallas Howard who planned it as her feature debut. Quick would later come aboard to adapt the screenplay.

That’s a lot of backstory, but it only goes to show that a lot of people were interested in making this movie a reality. Cravalho plays a teen juggling her musical aspirations with high school life, while also supporting her mother, who is struggling to keep it together.

Haley, who everybody knows at this point is a director I absolutely love, is probably best known for his music comedy Hearts Beat Loud. But before that he directed two terrific movies geared towards an older audience: I’ll See You In My Dreams followed by The Hero. Earlier this year he directed teen romance All the Bright Places for Netflix, making this a continuation of their partnership. Here’s hoping it continues because Haley’s movies are never going to make a ton of money at the box office, but they are perfect for the streaming crowd. Haley just recently agreed to direct Grease prequel film, Summer Lovin‘.

All Together Now hits Netflix on August 28th.

SYNOPSIS: Amber Appleton (Auli’i Cravalho) remains an optimist even when her personal life is far less stable than it appears on the surface. A musically gifted high school student with aspirations to attend Carnegie Mellon, Amber balances her beloved high school drama club helmed by Mr. Franks (Fred Armisen) with working long hours at a donut shop to help support herself and her down-on-her-luck single mom (Justina Machado). She also spends time at the local retirement community, giving care and attention to her favorite pessimistic resident (Carol Burnett). When new obstacles present themselves that threaten her dreams, Amber must learn to lean on the strength of her chosen family to move forward.

All Together Now photos
1 of 4