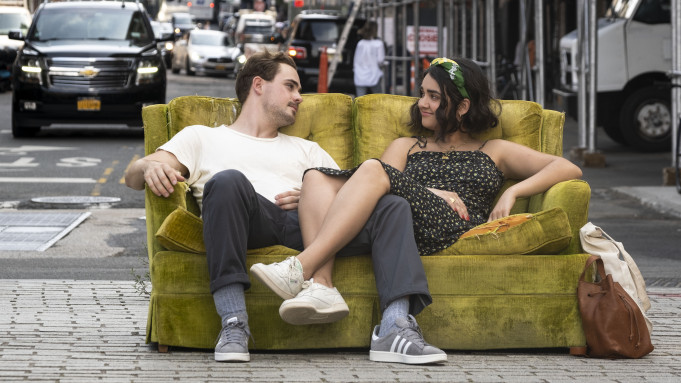 The R-rated comedy Blockers may not seem like the most likely place to find a new breakout star, but it certainly served well for Geraldine Viswanathan. She has been everywhere since, from the underrated drama Hala, to a couple of seasons of Miracle Workers, and the HBO film Bad Education. And now, she might be in the first movie you see in a movie theater this summer with The Broken Hearts Gallery.

So on July 17th you’re not going to get Tenet as expected, but you can still head to a theater and check out rom-com The Broken Hearts Gallery. The film stars Viswanathan alongside Stranger Things heartthrob Dacre Montgomery, and centers on a young art gallery assistant recovering from a breakup who wanders into the car of a stranger and doesn’t end up murdered, but sparking what could be her next great relationship. Well, there are plenty of “stalker” and “murder” jokes so at least writer/director Natalie Krinsky is in on how ridiculous this particular meet-cute is.

Like I said earlier, The Broken Hearts Gallery will be in theaters on July 17th, making it one of the first movies available as they reopen doors. This could be a golden opportunity for a movie that might’ve been overlooked otherwise to shine. Will you be there to check it out?

SYNOPSIS: What if you saved a souvenir from every relationship you’ve ever been in? THE BROKEN HEARTS GALLERY follows the always unique Lucy (Geraldine Viswanathan), a 20-something art gallery assistant living in New York City, who also happens to be an emotional hoarder. After she gets dumped by her latest boyfriend, Lucy is inspired to create The Broken Heart Gallery, a pop-up space for the items love has left behind. Word of the gallery spreads, encouraging a movement and a fresh start for all the romantics out there, including Lucy herself.