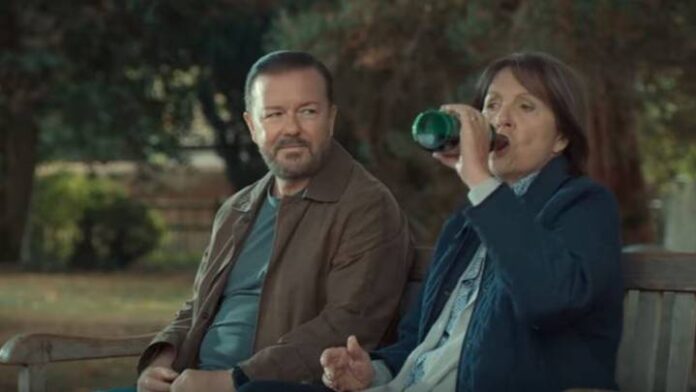 Ricky Gervais is back in After Life, his hilariously melancholy show focusing on what comes after the death of a spouse. At the end of season 1, we left Gervias’s Tony slightly better off than when we found him. Though he was still mourning the death of his wife Lisa (Kerry Godliman), he decided that life was worth living and that the people in his everyday life made it worth-while.

This quest continues in the season two trailer, where we see Tony try new things like yoga and actively being kind to the people around him. “When she died, everyone tried to help me and they sort of saved me,” Tony tells Anne (Penelope Wilton, Downton Abbey). “I feel like I should help the people who helped  me.” Whether it’s starting a food fight at work or setting up the local prostitute with the eccentric postman, it looks like season 2 is more hilarious and heartwarming than the last.

Check out the trailer below. Season 2 of After Life premieres on Netflix April 24th. Catch up on Season 1 now.