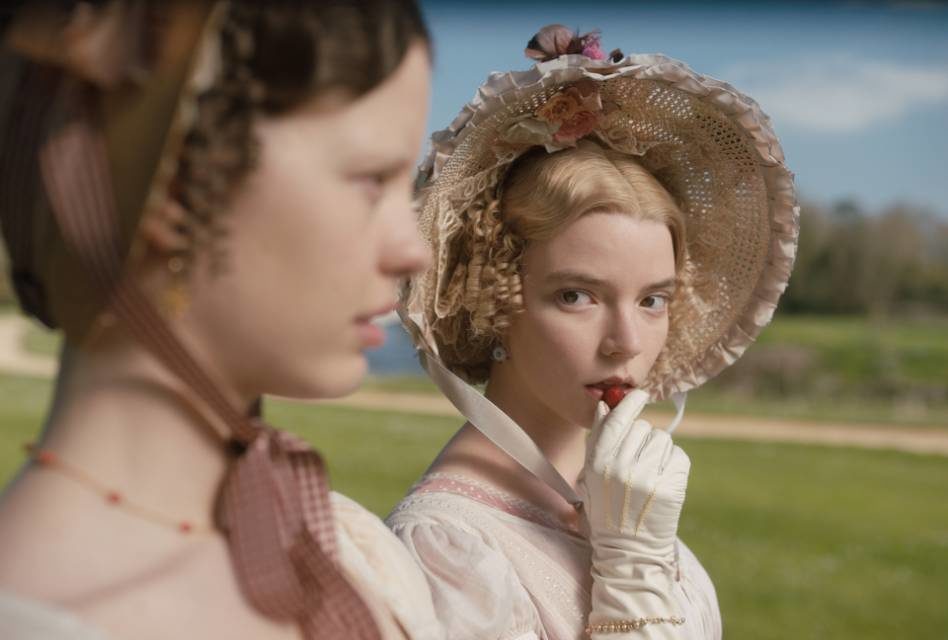 Handsome. Clever. Rich. Though those words were penned by Jane Austen to describe the titular character Emma in her beloved comedy, they certainly describe Focus Features’ newest adaption of the same work.EMMA. is certainly handsome with gorgeous costumes and set design, pops of color seem to fly off the screen. It’s clever, using sexuality as a way to bring out an unseen side of the classic. The film’s richness, however might be its downfall, being too long and overcrowded for its full potential to shine through. Directed by Autumn de Wilde and written by Eleanor Catton, EMMA. injects new life into regency classic.

Published in 1815, Austen’s last work she saw released before her death, the story follows Emma (Anya Taylor-Joy), a beautiful and rich young woman living in England with a knack for matchmaking and speaking her mind. Often unchecked by her peers, except by her intriguing neighbor Mr. Knightley, Emma has had great success with meddling in other peoples lives until she takes Harriett Smith (Mia Goth) under her wing  and a farce ensues. When things unexpectedly and consistently start to go awry, Emma’s outlook on life and the treatment of others is called into question. As her love for Harriet grows and her feelings for Knightley change, her world view is blown apart and her expectations are proven wrong.

As Mr. Knightley, Flynn is subtly passionate and plays the character delicately. His performance brings a rare masculinity to the character, one full of emotion and awareness. The way he plays Knightley to the character’s furthest potential, compliments and adds to his chemistry with Taylor-Joy. She nails her portrayal of the character at the beginning and end of the film brilliantly, but struggles to accurately capture Emma’s emotional journey. Channeling more Cher Horowitz from Clueless rather than Gwenyth Paltrow in 1996’s Emma, Taylor-Joy plays the beloved character with playful sass and arrogance and a breath of sensuality.

Like most things in life, EMMA, needs more Bill Nighy. As Emma’s pessimistic and hypochondriac father, Nighy steals every scene he’s in. Whether its flitting down the stairs or demanding servants deal with a draft, Nighy grounds the film in levity. Josh O’Connor (Season 3 of The Crown) also makes his comedic mark on the film as the impish and rude vicar Mr. Elton. Showing off his comedic timing and cadence, O’Connor wisely uses his talents to compliment the character’s weaselly nature.  The rest of supporting cast is a who’s who of actors in that BBC show you saw that one time. Gemma Whelan from Game of Thrones, Sherlock’s Rupert Graves, Call The Midwife’s Miranda Hart, all charmingly play various members of Emma’s unofficial fan club.

The essential question that must be asked whenever a remake is made is “Does this adaption elevate the work?” A recent example of this is last year’s Little Women where writer/director Greta Gerwig not only used the original source material, but used Louisa May Alcott’s journals, other writings and even rants from Meryl Streep to tell  with a modern sensibility. From first glance it seems like this version of Emma doesn’t do much to elevate past adaptions until you realize that the story is framed from the female gaze. Something commonly unseen in previous adaptions of Jane Austen’s work. We not only see Emma fall in love with Knightley over time but we her sexual attraction to him grow. From longing looks, to licking fingers after eating a sweet, never breaking eye contact, the control and sexual desire is completely framed from a female point of view. Emma owns her sexuality, well as much as she can for the regency period. Early on there’s a seemingly needless moment of male nudity, but its well placed and well appreciated. How much needless female nudity have we had to endure for the sake of it? De Wilde uses it to let us know that this version is going to be different. We are going to see Mr. Knightly through Emma’s eyes, that this story of matchmaking. And what comes after a match is made? Sex.
What holds this adaption back is its run-time. Normally with adaptions, so many plot points from the original work are omitted. Well, not this time. It feels like every little detail is included and it’s tedious. Smaller moments could be condensed and or cut all together. With so much going on, Emma and Knightley’s relationship seems to lag in the middle and some of these intricate interpersonal wheeling and dealings get muddled as a result.
Is it this the greatest adaption of Austen’s beloved comedy? Ugh. As if! But with its picturesque staging and delightfully charming and endearing performances, it is a refreshing take on the beloved piece. It’s a shame that its long run time and over-crowded nature make the business of matchmaking seem messier than it needs to be.
Rating: 3 out of 5