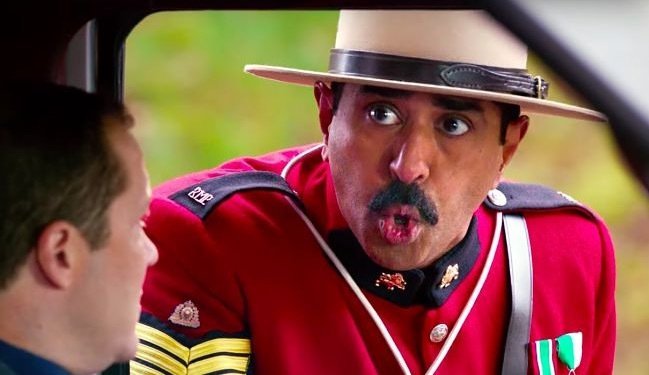 I have a certain group of friends who will swear that Super Troopers is a funny movie, but the Broken Lizard guys have never done much for me. I think their humor was fine nearly two decades ago, but when I see them now, like in this NSFW trailer for Super Troopers 2, it just looks painful. Still, their devoted fans, small as that contingent may be, will likely show up to see what the idiot cops do next.

The long-developing sequel reunites the original Broken Lizard gang, joined by Brian Cox, Lynda Carter, Tyler Labine, Emmanuelle Chriqui and Rob Lowe, for a dumb laugher that takes the highway patrol up north to Canada. The easy jokes write themselves.  Here’s the synopsis:

Everyone’s favorite law enforcement team is back by popular demand with the long anticipated follow up to the cult comedy classic…SUPER TROOPERS.  When an international border dispute arises between the U.S. and Canada, the Super Troopers- Mac, Thorny, Foster, Rabbit and Farva, are called in to set up a new Highway Patrol station in the disputed area. Unconventional police work follows, and the result is…SUPER TROOPERS 2.